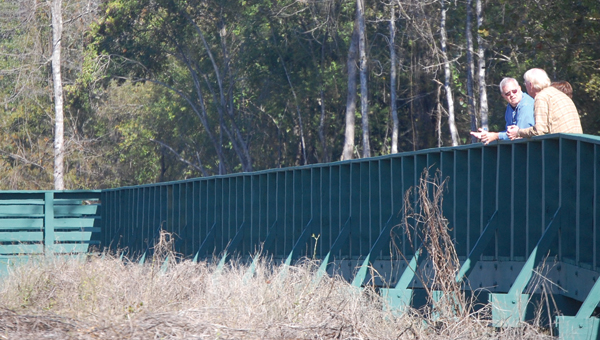 Nearly 20 years ago, city officials and volunteers had the idea to create a walkway between Burnt Corn Creek Park and O’Bannon Park.

On Tuesday, that walkway — about 1/3 of a mile — was dedicated, but it may be the first step in a larger vision for a longer walking path.

“This journey began 20 years ago,” said Brewton Mayor Ted Jennings. “If someone is the brainchild behind it, it is Bob McMillan. The vision then was to start the project here and have a walkway go all the way to the YMCA. It’s taken about 20 years to get this done.”

Jennings thanked those who have supported the project. The walkway between the parks was paid for by grant funding.

Jennings said he believes the walkway will be a “great asset” to the city.

“This is a project the city can get behind,” he said. “Obesity is growing by leaps and bounds. It is incumbent on government to provide an opportunity for people to improve themselves. In the final analysis, it’s up to each of us.”

Joe Gordy, chairman of the city’s Tree and Beautification Committee, said he hopes the project will continue to develop.

“We welcome everyone to use the walking trail anytime,” he said.