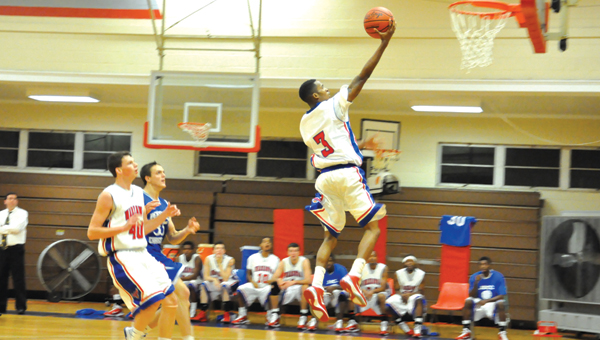 The Jefferson Davis Community College Warhawk basketball, after starting the season 0-3 on the road, got their first win of the season at home Tuesday with a 73-53 win over Pensacola Christian. The win improved JDCC to 1-3 overall.
The Warhawks of JDCC used a 19-0 run in the first half to turn a 9-6 deficit with 13:18 left in the half into a 25-9 lead with 6:51 remaining.
JDCC held the Eagles of PCC scoreless for 6:40 as they took the 16-point lead.
JDCC would hold leads of 35-12 with 3:56 left in the half and 40-19 before ending the half with a 23-point lead at 42-19.
JDCC was 5-for-7 from the free throw line in the first half while PCC was 5-for-8. The Warhawks had 10 scorers in the half with two in double figures.
In the second half, PCC rallied with a 10-0 run to cut the lead to 55-39 with 10:35 left and 61-47 with 5:26 left.
JDCC would finish off the win by going on a 7-0 run of their own to take a 68-47 lead with 3:34 left in the game before winning 73-53 despite being outscored 34-31 in the second half.
JDCC was 8-for-10 from the free throw line in the second half to finish 13-for-17 while PCC was 8-for-12 to finish 13-for-20.
JDCC Warhawk head coach Allen Gainer was proud of the win, but not so proud of his team giving up the big lead in the second half.
“We kind of got carried away in the second half,” Gainer said. “We thought the game was over and it was not. They cut it to 14 and they were back in the game. We just didn’t do what we needed to do to finish the game. That has to do with being so young. We have to do better than that because if we are playing teams like we have next with Bevill Jasper, a 23-point lead is not big enough with the athletes they have.”
Gainer said that has been the story in all four games for his team this year in the second half.
“We play great in the first half and in the second half, we are not focused,” Gainer said. “Hopefully we will get that squared away in the next nine days. It is good to have the layoff between games. I didn’t want the layoff, but now we have nine days and we need this to get focused.”
Gainer said the win was a nice one especially being at home with a good loud crowd.
“The baseball team gave us some extra energy,” Gainer said. “They did an outstanding job to give us a home court advantage. That is the best I have seen in years. They got after it and kept us excited.”
Braylon Lazare led Brewton with 19 points followed by Kahlee Tyler with 17 points. Daryl Duncan had nine points and Sherman Presswood had eight points. Brandon Scott had six points followed by Chris Peak and Turmonte Ragland with four each, Larel Jackson and Travis Allen with two points each along with Joshua Fealing.