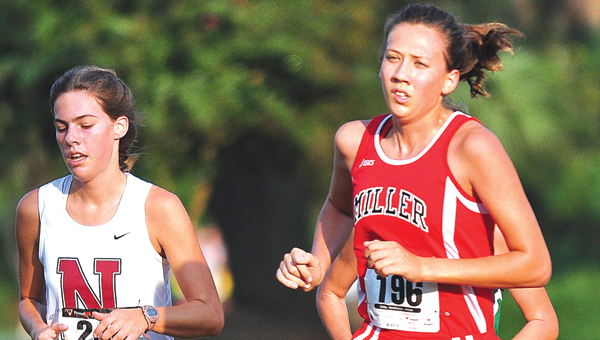 This Saturday morning, the T.R. Miller Lady Tigers will be chasing a state championship, at the 3A state cross country meet in Moulton at the Oakville Indian Mounds Park.
The Lady Tigers, who have finished as two-time state runner-up at the meet, will be running at 8:50 a.m. while two T.R. Miller Tigers on the boys team will be running as individuals at 9:50 a.m.
The Lady Tigers qualified for the state meet last week as they won the 3A sectional meet. Christian Carlson and Rob Stokes qualified for the boys as individuals.
Tiger head cross country coach Rob Atkinson said the sectional race was the best race the girls had ran all year long.
“I was extremely with the way we ran,” Atkinson said Thursday afternoon. “Amber Terry had her best time of the year as our No. 5 runner and she really stepped up and did a good job for us. Karisa Nelson almost had a personal record as she ran an 18:32 on a tough course. That course (in Auburn) is a tougher course than the course we are going to run at state. The state course is a faster course so hopefully we should see some really good times this weekend.”
Atkinson said the boys competed really well, but fell short qualifying as a team.
“I thought we had a good chance at qualifying for state,” Atkinson said. “We just fell short in one or two places and the other teams had some good times. We are really young but we have a really good nucleus coming back next year. As far as teams I have coached in my 20 years of coaching now, that team has improved more than any other team I have coached before. I was extremely pleased with them from where they started to where they finished. They did an outstanding job.”
Atkinson praised Ryan Snowden, Christian Carlson, Carter Frezell, Grant Youngblood, Andrew Pollitte, and Rob Stokes.
“Carter shaved so much time off his times which is amazing,” Atkinson said. “They all did a tremendous job and need to be commended for what they have done.”
For this week at state, Atkinson said the competition the girls we see at state will be tough.
“The competition has been getting more and more competitive each year,” Atkinson said. “We are still competing with Montgomery Academy who is the two-time state champion who we have finished runner-up two twice. We did very well against them in sectionals last week and won the sectional, but Rogers has dropped down from 4A to 3A and they have finished second to UMS-Wright last year and they have a really good team. They have five girls who are running under 21:00 and one girl who runs around 18:55 so they are a very good team. It will take a monumental effort to win the state championship. It is possible, but will take a monumental effort.”
Atkinson said with the two runner-up finishes the past two years, he has seen the girls being more hungry this year to win it all.
“We have trained really well this year,” Atkinson said. “We have improved all year long. Karisa Nelson has been our leader all year long and she has really stepped her game up and pushed herself and made the whole team better. Shelby Youngblood has really stepped it up too and her times are coming down in a hurry also. The training we have done will translate into some great times on Saturday. They have all set lofty goals and if they will meet their goals, we will take the results regardless of what happens. I will be proud of them regardless of the outcome.”
Atkinson said the key to a state championship Saturday will depend on how Amber Terry and Amber Nelson do.
“If Amber Terry is in the top-18 and Amber Nelson is in the top-six, we have a legitimate shot,” Atkinson said. “It will be a two or three-point race if that happens. If not, then Rogers or Montgomery Academy will probably win the state championship. It will be an interesting race. You have Rogers, Montgomery Academy, Randolph and us. It should divide up between those four teams right there.”