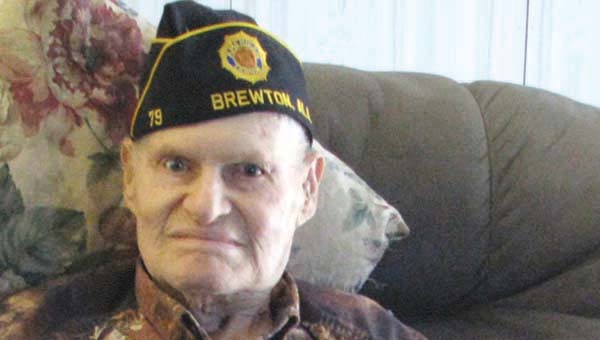 Fred Dixon was just 16 when he joined the U.S. Coast Guard.

He was so young that his parents had to give permission for him to enter the service.

“I wanted to join and there were a couple of others that said they would join,” Dixon said. “We left school and joined the Coast Guard, thinking that we would be able to choose where we were sent.”

Two years later, Dixon was part of the Normandy invasion on June 6, 1944.

On Veterans Day last Thursday, he was honored for his service by Covenant Hospice.

Joe Dozier with the American Legion presented Dixon with an American Legion pin and certificate thanking him for going into the military and assisting in the Normandy invasion in 1944. Dixon is a patient of Covenant Hospice.

Mrs. Dixon said that her husband’s parents signed allowing him to go into service at such a young age. “Yes, all of them were too young to be drafted, but their parents said it was OK,” she said. “Later on Fred received his notice that he was being drafted, but he was already overseas.”

Even though Dixon and his friends hoped they would stay together and be stationed in the United States, that was not to be. They were soon separated, each to go his own way.

Dixon was sent to England and on June 6, 1944, and was part of the D-Day invasion. He was part of the support group for the invasion and was on a U.S. Army Y 25 coastal tanker, loaded with fuel. The boat was a part of 112 coastal tankers that were built for the war. They were either 162 or 182 feet long and were meant to carry supplies to the troops.

“You can’t imagine how much noise that number of ships and boats made,” Dixon said. “Then you add the noise from the big guns on all those ships. It’s a wonder that anybody could hear anything. We were off shore and a German sub got close enough to fire two torpedos at us. One went by the front of the boat and one went behind. If one of those torpedos had hit us, we would have been blown to bits with all the fuel we were carrying.”

Dixon and his wife took the opportunity a few years ago to go and stand on Utah Beach, and he said it brought back a lot of memories.