Miller out of playoffs 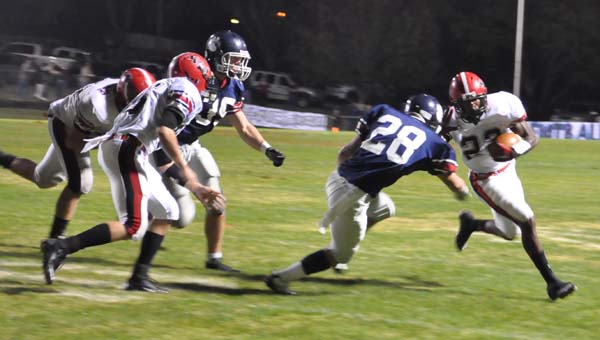 For the second straight year, the T.R. Miller Tigers dropped a second round playoff game to a team from their region that they faced earlier in the season as the Tigers lost to Trinity Friday night in Montgomery 21-14.

The loss to Trinity was the second loss to the Wildcats this season, both on the road. The Tigers finished the season with an 8-4 record.

“Trinity has a great team,” T.R. Miller Tiger head coach Jamie Riggs said. “They do a lot of things right and they don’t have a lot of weaknesses so it is difficult to attack that. We should have had enough gas to finish it in the fourth quarter and we didn’t. The credit goes to them. They made the plays and dominated the fourth quarter. That is where games like this are won or lost.”

The Tigers would take a 14-0 lead with 2:47 left in the third when Anthony Herbert scored on a 4-yard run to give T.R. Miller a two-touchdown lead.

From there, Trinity would cut the lead to one score on a 25-yard run with 43.7 seconds left in the third quarter.

From there, the Wildcats would hold T.R. Miller to only two more first downs while scoring on a 19-yard run to tie the game at 14-14 with 9:31 left in the game.

Trinity would then take over on downs and used four plays to take a 21-14 lead with 7:00 left in the game.

The T.R. Miller defense would give their offense one more chance but a late Wildcat interception would seal the win.

Trinity had 283 total yards of offense in the win with 196 rushing and 87 passing. The Wildcats had 19 rushing in the first half and 49 passing while accumulating 177 rushing in the second half and 38 passing.

Herbert led T.R. Miller rushing with 103 yards on 20 carries and one touchdown.

Wil Riggs was 14-for-21 passing with one touchdown and one interception for 202 yards.

Herbert led with five catches for five yards while Ryan Hunt led with one catch for 41 yards.

“In some respects it has been a really tough year and in other respects, it has been a really great year,” Riggs said. “We started out kind of slow, but we made a great comeback. T.R. Miller will mess some things up sometimes, but we are known for our comebacks. They did a great job and I am really proud of them. When it is all said and done, I think they will remember the good things. This sting of the loss will hurt for awhile but it will go away.”