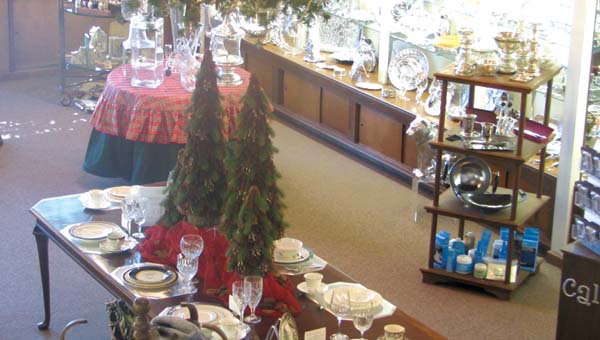 What started out as a simple gift shop started by enthusiastic but somewhat inexperienced operators has grown into a thriving business celebrating 25 years of serving the Brewton area.

Margie Luttrell remembers those early days at The Treasure Chest, having been one of the original members of the staff at the downtown location. Luttrell retired from the business in 2004 but has vivid memories of how the retail store began.

“I received a call from Terrell Neal asking me if I would like to run a gift shop,” Luttrell said. “Well, I didn’t know much about how to run a gift shop, and told Terrell that. He said it was OK and that we would ‘learn as we go.’ I prayed about it and I am sure that Terrell and Patty did, too.”

Terrell and Patty Neal are still owners of the store that now thrives in its original location along St. Joseph Avenue in downtown Brewton. Although Luttrell said she was willing to give the work a try, she said it was certainly a learning experience.

“Neither they nor I had any idea what ‘going to market’ was all about,” Luttrell said. “But Terrell, Patty and I made three trips to the market which is in Atlanta. We spent five days each time we went, shopping for what we thought would be good items for the store. It was hard to think about the fact that we didn’t just buy one of each thing, but we had to buy several.”

Those early trips brought the trio closer together with an eye for what might be appealing to Brewton area residents.

“We looked for things we thought would sell well in Brewton and unusual things that were not already available here,” Luttrell said. “Each evening, after we had spent all day shopping, we met together to discuss the things we had bought. Patty was very good at crunching the numbers and she kept an eye on us. We would always be so tired when we got back to the hotel rooms. I had thought that shopping all day would be fun, but it was pretty stressful. We ate a lot of crackers and Coke for lunch.”

Luttrell said that although the shopping was hard, it was a lot of fun when the packages began to arrive in Brewton.

“By the time they were shipped to Brewton, we had forgotten some of the things we had bought,” Luttrell said. “It was a lot of fun opening the boxes to discover things all over again.”

The decision was to locate the business in downtown Brewton but the opening was delayed more than once.

“We kept having to put the opening off because all the stock had not arrived,” she said. “We finally opened during Thanksgiving week of 1985. After that we just operated ‘on a wing and a prayer.’ It was scary but very exciting.”

But along with the charm of having a business in historical downtown Brewton comes the downside of being located in a flood zone. The Treasure Chest has suffered through three floods. But, with the help of friends and even some strangers, those misfortunes were saved from being tragedies.

The first flood caught everyone by surprise, Luttrell said. But, the response from friends was immediate.

“We were all at a church supper and someone came in to tell Terrell that the water was rising and he needed to do something about his merchandise,” she said. “I can’t tell you how many people got up and went down to help. Actually it has always been that way. People are ready and willing to help.”

Karen Saloom, current store manager, said even through the years of floods no consideration of moving from the downtown area had ever been considered.

“This last (flood) we didn’t think too much about,” she said. “Burnt Corn Creek was rising, and we just knew to look out for Murder Creek. So far as I know there never has been a consideration of moving the business anywhere else. We love the historic downtown area and have no plans on moving.”

Floods, recessions and trends have changed the operations of the business, but the core value of serving the community has remained the same.

“When the store first opened, brides still picked out china, crystal and silverware,” Saloom said. “Some still do, but things have changed a lot. Today there are many more women who work outside the home and don’t have the time to use those items as much. They live a more casual way of life.”

Along with traditional items, The Treasure Chest has moved toward catering to certain tastes and following some trends.

“Today we carry more jewelry and collegiate things,” she said. “Auburn and Alabama items always sell well. I am not pro any team, but this type of merchandise really sells well.”

The original staff has grown from a pair of owners and one staff member to four full time employees. Saloom, Carol Fountain, Ann Romerez and Angel Baxter are now available to serve customers of the business. Debra Mullis and Leslie Lisenby Jackson are also part-time employees.