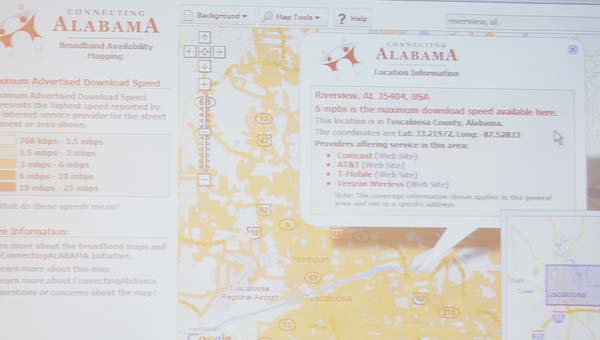 Imagine you live in a rural area and commute long hours to work. Your only opportunity to communicate with your bank, doctor or other institutions might be over the Internet.

But if you live in a rural area without high-speed Internet, such connections might be so slow that you can’t get online. And in today’s world, a high-speed connection is becoming a necessity.

That is the connection problem that ConnectingALABAMA — the Alabama Broadband Initiative — is trying to solve.

The group held a kickoff event Thursday at ASU’s Southern Normal campus in Brewton to introduce the project to residents. Planning meetings will be held soon to gather ideas from the community.

“It gives you access to the world around you,” she said. “We in rural Alabama … have to unite and demand to have this access. And we have to learn to use it.”

With preliminary mapping, broadband initiative officials were able to see where the gaps in high-speed connectivity are.

At Thursday’s meeting, Tony Shackleford of A2D — a corporate partner in the project — spoke about his company’s plans for the region that includes Escambia County. A2D envisions an intranet system that would connect households, businesses and government institutions in the region on a broadband fiber optic network.

Households could connect to necessary institutions — such as the library or city hall — for free, then would have a variety of carriers available for affordable Internet service for more commercial usage, such as games or other sites.

“This is a leveling project,” Shackleford said. “This is what we need to advance the economy.”