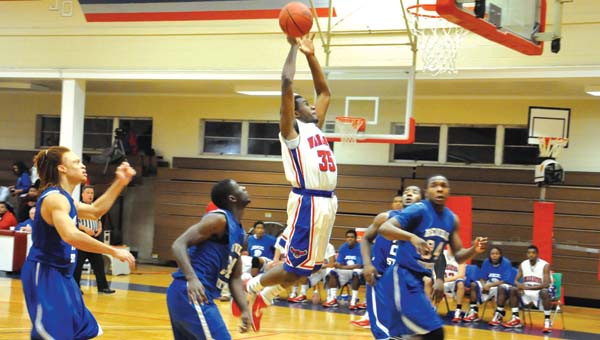 Trailing by 12 points to Bevill State-Jasper Thursday at home at the half, 34-22, JDCC Warhawk basketball head coach Allen Gainer said his team had two options—either to get blown out or step up and rally for a win.

“Bevill’s coach gets his guys to play so hard and with so much intensity,” JDCC head coach Allen Gainer said. “We were teetering right there at halftime. It could have gone either way with us either getting blown out or we could have stepped up and matured as a team and we stepped up and matured. I am so proud of the guys. With all these new and young guys, for them to play and beat one of the best teams in the north and to fight through the big lead Bevill had was something. Right there at the end of the game, they had the opportunity to take the lead back from us and we held on to it. We hit the free throws and we handled the ball and we handled our business. I could not be more proud of them.”

One factor of the Warhawk win Thursday was the play of freshman forward Braylon Lazare. Lazare had six points at the half but poured on 14 points in the second half including the first eight points of the second half to finish with 20 points to lead the Warhawks.

“Braylon is a phenomenal athlete,” Gainer said. “There was a point there to start the second half that he came out and said that we were going to win the game. He said he was going to put us on his shoulders and win this game for us if I have to and he did. He hit four or five shots right there in a row to start the second half and that was really the difference. They just could not do anything with him. He is such a tremendous athlete and he is so big and strong. If he can go out there and play like that every night, nobody can do anything with him. I think that was great timing and he stepped up for us and rose to the challenge.”

Another key factor in the game was another great Warhawk crowd that has helped JDCC to two wins at home in two tries.

“The crowd was good and will continue to get bigger the more wins we get and the more exciting games that we have like this,” Gainer said. “Again, them getting involved to start the second half was the difference. It gave our guys energy and we get a little run and the crowd got behind them and that makes a huge difference and a home court advantage.

“We talked about to be able to win the south division, you have to win all your home games. There are going to be teams that are bigger than us but we are taking care of some good teams right now at the ‘Hawk’s Nest.’”

Gainer said with his team being so young, to comeback, it is hard to comeback on anybody at anytime, especially a well-coached team like Bevill.

“Their coach is a multiple state champion, coach-of-the-year, he just does a great job of getting his guys to execute and they do,” Gainer said. “For us to comeback and win, it is a stepping-stone.

“This is a chance for us to really move forward and to help us in the Mississippi tournament.”

Lazare led eight scorers with 20 points followed by Kahlee Tyler with 13 points, Brandon Scott with 12, Sherman Presswood with six, Larel Jackson and Travis Allen with five, Turmonte Ragland with two and Daryl Duncan with one.

JDCC will play in the Mississippi Gulf Coast Tournament Monday at 7:15 p.m. and Tuesday at 3:30 p.m.