Students ‘lend a hand’ to park 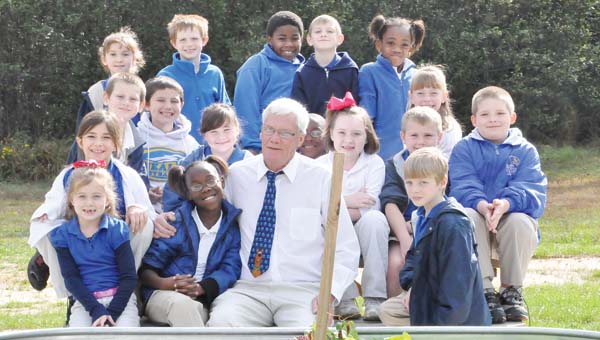 Dozens of little hands left their mark at Fort Crawford Park Thursday morning, as second-graders from W.S. Neal Elementary “lent a hand” to the park’s renovation.

The project — which saw children leave their colorful handprints to decorate new picnic tables under the park’s pavilion — was the brainchild of East Brewton’s Dwayne Carroll.

Carroll wanted students to take part in the decoration because the park’s renovation is for them.

“That’s what this whole park is for, the future,” he said.

Carroll has been leading the renovation of the park, which began about two years ago.

RSVP volunteers — who helped plant a community garden at the park — were also on hand to help Thursday. The park has also received a grant from Gulf Coast Resource Conservation and Development. And Carroll’s family has been heavily involved — nephew Samuel Wright and grandson Shane Ard are junior park rangers at Fort Crawford as well as junior members of RSVP.

Wright said he has enjoyed not only spending time at the park but also working there.

“I’ve been cleaning up, planting, picking up bottles and trash,” he said.

Plans continue for more work at the park, including the addition of a nature trail, gazebo, amphitheater and playground equipment.

Carroll said he is looking forward to seeing the park’s completion.

“The Lord just put this on my heart,” Carroll said. “I wanted to give back.”

Carroll said he hopes more and more families will use the park. “It’s beautiful,” he said. “And it’s a safe place, and it’s free.”

Anyone who wishes to donate to the park can send a check to City of East Brewton/Fort Crawford Park, 615 Forrest Ave., East Brewton, 36426.