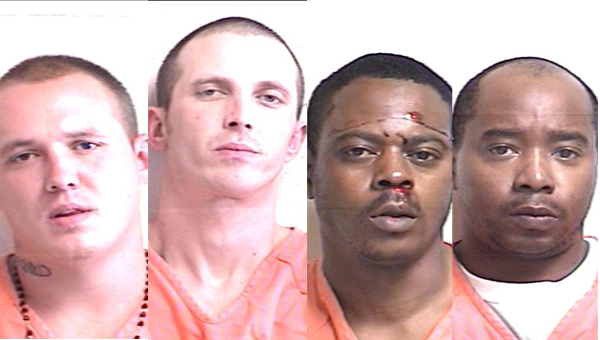 Brewton police made five arrests on a variety of drug offenses over three days last week, including one suspect who tried to flee police twice.

Police said Demetrius Deonta Barton, 32, of Brewton, tried to run from officers after Sgt. Andrew Casey made a traffic stop and searched his vehicle on St. Joseph Street and Sowell Road just after 1 p.m. on Thursday.

“As he was being transported, Barton fled on foot again from officers,” Davis said. “Officers apprehended Barton a second time and he was charged with escape in the third degree.”

Barton was transported to the Escambia County Detention Center.

Last Wednesday, Casey was investigating suspicious activity at the car wash on Mildred Street when he identified three occupants of a vehicle believed to be involved in suspicious activity. Officers said Ava Nichole Lucas, 19, of Wing, and Scotty Dewayne Watson, 29, and Clinton Dean Watson, 25, both of East Brewton, were in possession of four different controlled substances — hydrocodone, Alprazolam, Carisoprodol and Diazepam.

All three were charged with possession of controlled substances and transported to the Escambia County Detention Center.

And at 8:30 p.m. Friday, members of the police department, narcotics division, and the special response team performed a search warrant at the home of Maurice Dywan Curry, 34, of 800 ½ St. Joseph St. in Brewton.

“Agents with the Brewton Narcotics Division found, crack cocaine and marijuana at the residence,” Davis said. “Agents also found items used to weigh illegal narcotics and other drug paraphernalia items at the residence.”

Curry was arrested and charged with unlawful possession of controlled substance-crack cocaine, possession of marijuana in the second degree and possession of drug paraphernalia. Curry was transported to the Escambia County Detention Center. This residence is located within ¼ of a mile from the Brewton Police Department Firing Range, which could mean additional time on his sentence if convicted.

Bond information was not available on any of the suspects.