Family thankful for Austin at the table 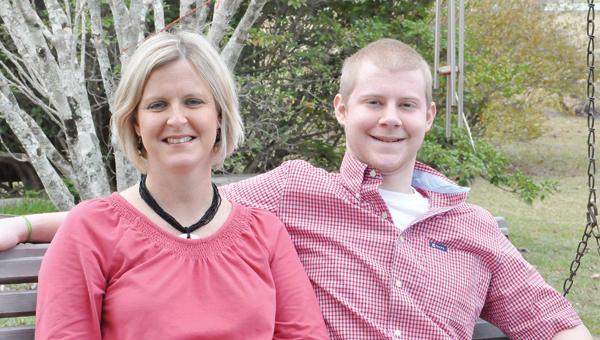 Susie Ivey never doubted that she would be setting a place at the Thanksgiving table for her son, Austin Collins.

But Austin’s presence — and the faith his family had in his survival — is a true miracle.

Collins received a new heart with a transplant operation performed by surgeons at UAB Sept. 23 following three agonizing months of waiting for a donor.

Collins was diagnosed last spring with congenital heart failure by physicians who said a transplant would be his best chance at survival.

Collins’ mother, Susie Ivey, said the ordeal was difficult but was made easier because of her unwavering faith in God.

“I never gave up on my faith in God,” Ivey said. “I knew he would take care of Austin and I never worried. God is good all the time.”

Ivey’s faith has been tested before, but she never lost hope when her daughter was in a similar situation. Daughter Anna also had a heart transplant when she was a toddler.

Collins is glad to be home and said this Thanksgiving will be especially meaningful for him and his family.

“I’m thankful for a new life and a new chance,” Collins said. “I’ve got to take it easy for another three or four months to build up my stamina. After spending six months in bed, it’s taking a little time to get back to where I was physically.”

Ivey said her son’s life was saved and gives thanks to God, the doctors and the donor.

“God has been so good to us,” Ivey said. “I am so thankful for the donor family that made Austin’s transplant possible. We certainly need more people willing to be donors. One donor can help so many families. I know there are people, including Austin, who would have died had it not been for a donor.”

The recent surgery that gave her son a new heart wasn’t the first time Ivey had gone through such an experience.

In April 2001, Ivey’s then-14-month-old daughter, Anna, received a heart transplant after doctors detected a heart defect shortly after she was born.

Anna, now 10 years old, has a close relationship with her brother and even wrote a book about his experience at UAB.

Ivey said the writing of the book gave Anna a chance to be a part of Austin’s experience and gave her some peace in the process.

“I think (writing the book) was Anna’s way of dealing with what was happening to Austin,” Ivey said. “It helped her and it helped us, too.”

Ivey’s husband, Cecil Ray, said he is so thankful to have his family home where they can enjoy being together every day.

“I thank God for my family and the fact that they’re at home now,” Cecil Ray said. “We are so blessed that all of our children get along well and love each other.”

Collins said he is getting stronger every day and has a plan for his future: nursing.

“I’ve had the idea to be a nurse for a long time,” Collins said. “After this experience I know this is what I want to do.”

Collins said after a few more months of recuperating, he plans to start school in January to pursue a career in nursing.

Ivey said she hopes her son will be able to be a blessing to patients once he becomes a nurse.

“It would be wonderful if Austin could go back to be a nurse at UAB where he was treated,” Ivey said. “He would certainly be sympathetic to their needs and feelings. He could be such a blessing to patients there.”

Collins said he would certainly consider being a nurse at UAB given the opportunity after earning his degree.

“I spent enough time at UAB that I already know the place,” Collins said. “I would certainly understand what the patients are feeling and experiencing. I’d love to have an opportunity to be there for them.”

If you ask each family member what they are most thankful for this holiday you may hear similar responses — family.

“God’s goodness to us is very evident in our family,” Ivey said. “We have gone through a lot together and we’ve gotten closer to God in this walk. We all take so much for granted every day. I’m thankful to be home and have my family around me. We all have a lot to be thankful for this year.”

Ivey said the prayers and support of church friends, groups, co-workers and even strangers helped the family both spiritually and financially during the time of care and recovery.

“There are so many people that have been there for us in so many ways,” Ivey said. “My husband has been my main support through all of this. Our First Baptist Church family and the staff at the church helped with prayer and financial support. The people at Brewton Elementary School and the whole system were wonderful to donate sick days for me so that I could be with Austin. Even people in the county school system donated days. I have been blessed to not miss a paycheck since this all happened. The Motivators for Christ held a fundraiser for Austin that helped financially. And the people that helped with Anna and welcomed her into their home during all of this time. Cecil and Marilyn Ivey, John and Denise Allen, Hallie and Roger Williamson and so many others have been wonderful and have been a blessing.”

At the end of the day, Ivey says there has been one constant for her family that got them to the point of being able to look ahead with hope for a bright future in the lives of her children.

“God provided everything we needed,” Ivey said. “We are all truly blessed and thankful.”