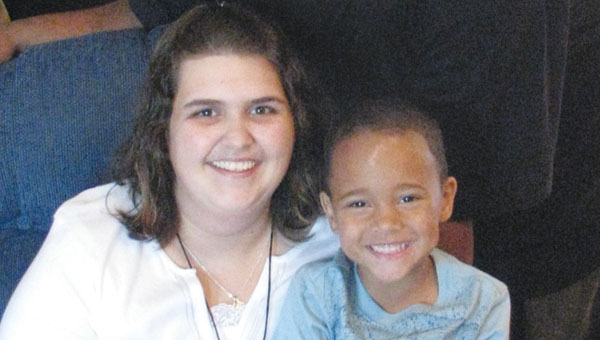 Terry Gillis spent weeks torn between being at the hospital bedside of her daughter or grandson, but those weeks have ended and the holiday season has begun with everyone at home.

Myah Gillis and her 4-year-old son, Jay, and boyfriend, Rock Herbert, were all injured in an Oct. 8 collision on U.S. 29 in the Boykin community.

That healing process continues for Myah, Jay and Rock, with each continuing a routine of physical, speech or occupational therapy.

Rock said he hopes to see an end to his therapy soon and expects a full recovery.

“I’m so thankful just to be alive,” Herbert said. “I had a broken hip and that was about it. I’m doing better every day. The doctors have told me that I’ll have to have a hip replacement at some point.”

Myah said her injuries were severe and will take much longer for complete healing to take place.

“I’ve still got a long way to go to get back to where I was,” Myah said “I’m just thankful for my life and being able to look at my son and know that he is OK. I’ve had wonderful care and lots of support from a lot of people. I’m so thankful to have had the good people at West Gate Nursing Home to take care of me after I got out of the hospital.”

Terry had loved ones in hospitals in two different cities.

“I hope that nobody ever experiences what I experienced knowing I needed to be in two places at one time,” Terry said. “I chose to go to Jay at Sacred Heart Hospital in Pensacola. Mayah was taken to USA Medical Center in Mobile. They weren’t even in the same city so I could go back and forth. Jay was later transferred to UAB in Birmingham, and I stayed with him the entire time he was there.”

Jay suffered a complete skull fracture in the crash and remained unconscious for some time following his arrival at the hospital.

“He had a skull fracture from one ear to the other,” Terry said. “He was unconscious and unresponsive. It was a scary situation.”

Rock remembers the moments following the crash thinking the worst of his passengers.

“When I looked at Myah, I just knew she was dead,” Rock said. “It was awful and all I could think was to let someone know that Jay was still in the car.”

As paramedics worked with the three victims, Rock said he was told the conditions of his passengers.

“They told me she was breathing and that they had gotten Jay out of the car,” Rock said. “It was a relief to know they were alive.”

Myah has no memory from the evening of the accident except getting ready to attend homecoming activities at W.S. Neal High School.

“I don’t remember anything before the time I was putting on my makeup before we left home,” Myah said. “The next thing I remember is when I woke up in Mobile in the hospital five days later.”

Rock’s memory of the event is more vivid with full understanding of what was about to happen.

“I touched Myah on the arm and told her ‘that car’s going to hit us’ just before it happened,” Rock said. “I saw him coming right toward us. I tried to get out of his way but it was too late. I’m just glad to see things getting better for all of us.”

Jay’s smile is a good indication that he is on the mend and will make a wonderful recovery, Terry said.

“To look at him you’d never know anything had ever been wrong,” Terry said. “He has a little scar on his forehead, but that’s all the visible evidence he was hurt.”

Terry said the 4-year-old has returned to school and is making improvements every day.

“He goes to school at the YMCA and was happy to get back,” Terry said. “The doctors have told us he has to wear a helmet if he does any activities that could make him fall or bump his head. That’s the main thing we have to be concerned with right now.”

Myah said the reunion with her son was one of the happiest days she can remember.

“With me being in Mobile and him in Pensacola it had been way too long since I saw him to know that he was all right,” Myah said. “It was a whole month before I got to see him and hold him in my arms. Just having a chance to do that was the best moment in the world.”

Myah said return visits to the doctors with Jay have shown her how resilient her son really is.

“He has already improved beyond what the doctors said he would,” Myah said. “They told us he would have trouble learning new things, but we don’t see any of that for him. He is catching on to new things quickly and to look at him or talk to him, you’d never know anything had ever been wrong.”

The family has expressed thanks to many people who have prayed or helped in some way during the recovery of those injured.

“We could never thank people enough for everything that they’ve done for our family,” Terry said. “The people of the community have been generous with their cards, phone calls, Facebook messages, donations, food, and more importantly, their prayers. There are no words to express how thankful we all are.”

The prayers of those throughout the community have given Myah and her family the strength to push forward on the long road to recovery.

“I know we are all going to be OK,” Myah said. “People tell us they are praying for us all the time. I know that must be true. I have no doubt prayers have gotten us this far.”