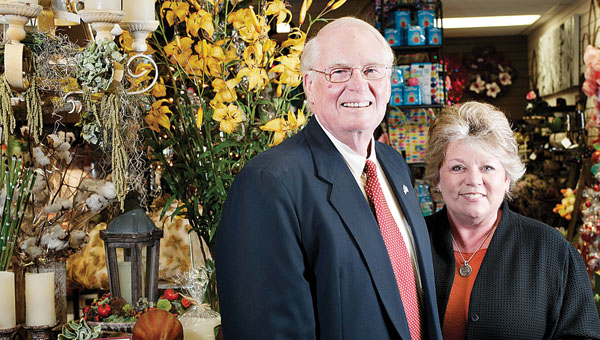 Joe and Carol Gordy have established two endowments at Mississippi State University to ensure the future of floral management and horticulture education at the school’s College of Agriculture and Life Sciences.

The couple’s gift created the Joe and Carol Gordy Endowed Chair in Horticulture and the Joe and Carol Gordy Endowed Professorship in Horticulture in a bequest through his will. Both faculty positions will allow the university to attract and retain top-performing faculty members who exemplify the university’s mission of teaching, research and service.

The Forest, Miss., native began his career in retail floristry in Starkville after receiving a degree in horticulture. As a student, he won several floral design competitions and design awards that drew attention to his knowledge and expertise.

In 1978, Knud Nielsen Co., a leading importer and manufacturer of dried flowers, invited Gordy to design several pieces for a wholesale florist show in Dallas. The dried designs were damaged during transit, and Gordy was flown to Dallas to repair the arrangements and attend the show. Several weeks later, Gordy was offered a position as director of product development at the Evergreen facility.

“This opened the door for my career in floral design and product development,” Gordy said. “The opportunity to work at Knud Nielsen Co. prepared me for a lifelong career in retail floristry.”

Gordy’s passion for flowers began with childhood days spent on a farm. He grew up working in the garden with his family and drew inspiration from the surrounding environment and nature.

“It was a love I was born with,” he said. “And I managed to get steered in the right direction to turn my passion into a career.”

A love of nature, as well as creative ability, helped Gordy succeed as a floral designer. Among his many accomplishments, he was invited in 1984, 1986 and 1987 to decorate the White House at Christmas for the Ronald Reagan administration. He also served as one of three international judges at the 93rd Tournament of Roses Parade in Pasadena, Calif., and was one of six floral design experts asked to judge the 1993 World Cup of Floral Design in Stockholm, Sweden.

Through the years, Gordy has been involved with several professional organizations such as the American Institute of Floral Designers, where he served on the board of directors, as well as national vice president and national president. Additionally, he has been a member of the AIFD Foundation board of directors.

In the early 1990s, Gordy and his wife purchased Natural Decorations Inc., a manufacturer of fine fabric floral designs and botanical reproductions located in Evergreen. As president and product development director, Gordy helped bring NDI into the forefront of the retail floristry industry.

“As a designer, my goal was to develop botanical floral reproductions that mimicked the same colors and textures found in nature,” said Gordy.

NDI moved headquarters and productions facility to Brewton in 1999, where Gordy remained president of the company until he retired.

Currently, NDI is led by Gordy’s wife Carol, a Dublin, Texas, native, who serves as chairman and CEO.

He remains active with the company as a director, but devotes most of his time to running the couple’s other business, Gordy Development Inc.

With their gift to Mississippi State, the Gordys hope to enrich the plant and soil sciences department by providing opportunities for outstanding faculty members. Both endowments will provide funds for creative research, teaching and outreach efforts within the department, thus improving the scope and mission of the College of Agriculture and Life Sciences.

“The endowments created by the Gordys at Mississippi State will strengthen the university’s stance as the center for floral design education,” said Jim DelPrince, professor of plant and soil sciences. “Joe is a creative talent and has a big heart.”

The Gordys’ commitment to the university is a tribute to the education he received at Mississippi State.

“I felt like I wanted to give back,” Gordy said. “A lot of the things I have achieved have been because of MSU. I have memories of people who pushed me along when I didn‘t want to be pushed, and our hope is to help future students and horticulturists achieve their dreams.”

Gordy is active on the city’s Tree and Beautification Board, an organization that seeks to improve the city’s landscape by planting trees and flowers, and assisting in street and park renovation projects. He enjoys growing orchids, gardening, and traveling with his wife.