County native to perform on TV 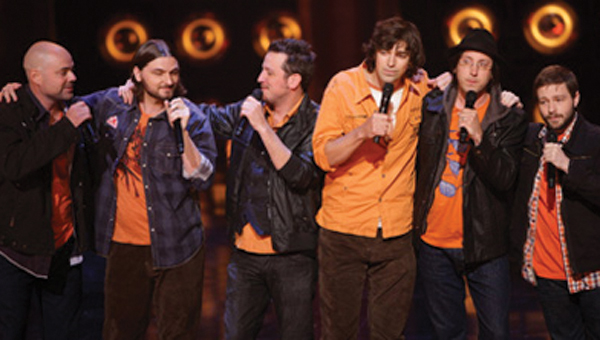 One local musician will live out his dream next week as he performs live on national television in one of NBC’s upcoming a cappella singing competition series.

Adam Chance Ray will compete as a member of the six-person ensemble, Street Corner Symphony, on season two of “The Sing-Off.”

Ray, a native of Escambia County who currently lives in Tuscaloosa, will take the stage in his television debut on Monday, Dec. 6. His parents, Glenn and Kristi Ray of Lottie, are eager to see their son perform in front of millions.

“We are very proud and excited about our son’s accomplishments in the field of music,” Kristi Ray said. “Through his diligence and hard work for years, he is finally going to be able to live out one of his dreams to perform professionally. We have always been very supportive in his musical endeavors. After all, we are his greatest fans.”

“The Sing-Off” airs from 7 to 9 p.m. and will be televised from the Alabama Wing House in Atmore so the community can cheer Ray on with his family and friends, who will be in attendance for a party. Ronnie Cloud, owner of the restaurant, said he believes the community should always rally around its own.

“This is an opportunity of a lifetime and we want to do our part in making it special for Adam and his family,” Cloud said.

Kristi Ray, who has been drumming up support for her son and the Street Corner Symphony, based out of Nashville, Tenn., the past couple of weeks, said her family is grateful for the community’s hospitality.

“We are humbled by Ronnie and his staff at The Alabama Wing House for their generosity in allowing us, our family and friends to gather there for this very special event,” she said. “It means a great deal to us to know that there are still people in this world and in our community that are willing to support friends, neighbors and our community in any and all situations. Ronnie and his staff are a blessing to the community.”

Ray attended grammer school at Perdido Elementary School and played baritone saxophone in the Baldwin County High School marching band from the eighth grade until he graduated in 2002. He received the Presidential Scholarship and Music Scholarship to Faulkner State Junior College in Bay Minette and later transferred to the University of Alabama.

The five-night holiday event series, which is hosted by multi-platinum recording artist Nick Lachey and will feature celebrity judges Ben Folds of Ben Folds Five, Shawn Stockman of Boyz II Men and Nicole Scherzinger of the Pussycat Dolls, will also air on Dec. 8, 13 and 15 with a finale on Dec. 20. The Ray family hopes the Street Corner Symphony can sing their way into the finale, and if so, they will join their son in California.

“If Adam’s group makes it to the finale, we are hoping to travel to Burbank, Calif., to cheer him on in person,” Kristi Ray said. “We hope they make it that far, and if this happens, we still want our friends, family and the community to rally around the TVs at the Wing House and cheer Adam’s group on.”

Adam Ray also has his own band, “The Last Great Fiction,” for which he composes and writes the songs/music, plays the guitar and is the lead singer. He also plays the piano, banjo, mandolin and writes and performs Folk music.

In addition, NBC has produced a CD that was released at Best Buy, Amazon and Walmart on Tuesday, Nov. 30 called The Sing-Off-Harmonies for the Holidays. The Street Corner Symphony sings Auld Lang Syne on the CD.

Each of the 10 groups on the show has one song featured on the CD.