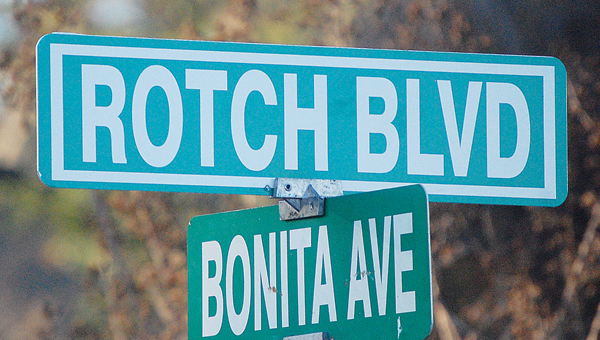 Just hours after news of his death spread in the community, students had erected a makeshift memorial of flowers and balloons in front of Principal Donnie Rotch’s parking space.

On Tuesday morning, his family unveiled a more permanent memorial in front of his beloved T.R. Miller High School.

Dozens of students, faculty and friends gathered in bitter cold to see the new “Rotch Boulevard” sign in front of the school. The new sign is the result of a student-led effort to rename the drive for the principal, who was killed in August in a head-on collision.

Leigh Margaret Bostic, treasurer of the senior class, said the street name will be a reminder of the principal who embodied the school’s motto, “legacy of greatness.”

“He expected nothing less than the best,” she said. “This is a public expression of his greatness and our love.”

Bostic’s letter to the Brewton City Council prompted the council to vote to rename the street in honor of Rotch. At Tuesday’s ceremony, Bostic joked that she knew just what he would say if he were there.

“He’d say, ‘Hey Hoss, get off that grass right now,’” she said to the crowd gathered on the lawn in front of the school.

Rotch’s wife, Jane, attended with their children, Richard and Jayme.

“T.R. Miller was his world,” Richard said as he fought tears. “He tried to do everything to make you happy. You don’t realize how much he impacted everybody until he is gone.“