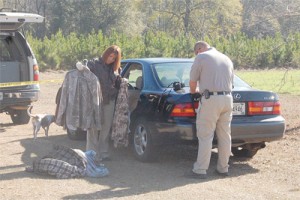 Crime Scene Investigators Janet Richburg and Adam Johnson catalog evidence found in what law enforcement officials believe was to be a getaway care for Fleming.

A suspect had a car packed with clothes, seemingly for a getaway, and shovels ready to help dispose of a body when sheriff’s officials arrived on the scene of a homicide in the Damascus community Thursday night.
Now in custody facing an open count of murder is the victim’s son, Jonathan Brian Fleming.
Angela Susan Fleming, 46, was found wrapped in carpeting on the back of her son’s truck when investigators arrived on the scene around 9 p.m. Thursday.
Chief Deputy Mike Lambert said the victim died of an apparent gunshot wound. The suspect initially confessed to the shooting of his mother, Lambert said.
“When we arrived at the home, Mrs. Fleming’s body had been wrapped in a rug from the living room and had been placed in the back of the suspect’s truck,” Lambert said. “When he came to the door we took him into custody without incident. He admitted to killing his mother at that time.”
A pan of cornbread and sausages remained on the stove in the kitchen while little else appeared out of the ordinary, other than the room where the shooting occurred, Lambert said.
“There had been some furniture moved around which may have been done so he could get the rug up,” Lambert said. “There doesn’t appear to be anything else out of place here. We are continuing our investigation to determine what motive there may have been in this shooting. At this point we have no idea what may have caused this to happen. It’s something we’re going to have to unravel.”
Lambert said officers received a tip that the incident had taken place from a caller who said Fleming had solicited help to dispose of the body.
“The caller stated that Fleming had contacted him and said that he had killed his mother and needed help getting rid of the body,” Lambert said. “Instead of helping, he made that phone call and we responded.”
The weapon believed to have been used in the shooting was found at the 805 McGowin Hill Road home near an outbuilding. A car also located on the premises was filled with clothes believed to belong to the suspect.
“We recovered a rifle just beyond the shed,” Lambert said. “The car here had clothes apparently thrown into the back. It would seem Fleming was prepared to leave the scene before any officers could arrive.”
Lambert said the victim and the suspect lived together at the home and there was no evidence anyone else was at the home at the time of the shooting.
“We don’t have any reason to believe there was anyone else at the house,” Lambert said. “The son and the mother apparently were the only two who live at the house.”
Officers and investigators with the Escambia County Sheriff’s Department and the Crime Scene Investigation Unit remained on the scene through most of Thursday night and returned to the scene on Friday to continue their investigation.
Fleming remained in the Escambia County Detention Center without bond as of press time Friday.