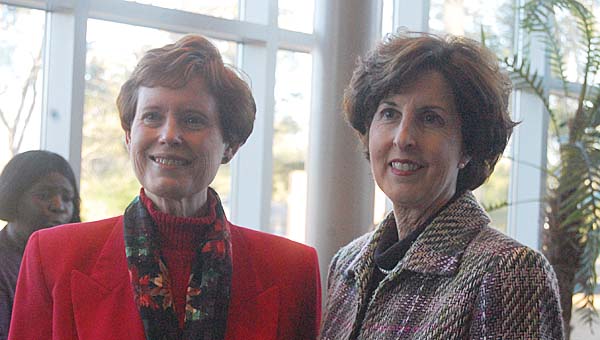 “This is a celebration because of all of the wonderful things she has done for the college,” said Hermine Downing, secretary of the JDCC Foundation.

Downing said McBride had used “diplomacy, wisdom, gentleness and kindness” to lead JDCC for the past 11 years.

McBride announced her retirement last month; she will be moving to Arizona to be closer to her daughter and grandchildren.

Dean of Instruction Kathleen Hall has been named interim president.

Hall told McBride that “words cannot express” how much she had done for the college.

“We are going to miss her deeply,” Hall said. “But anybody who is a grandmother or grandfather knows how special they are.”

McBride joked that she was sure when she interviewed for the position as president nearly 12 years ago that she “didn’t think they were going to hire a Yankee lady at Jefferson Davis,” but she was honored to have served at the school.

“This has been a wonderful experience for me,” she said. “A lot of people are giving me credit, but there are a lot of people in this room who were doing a fantastic job at this school before I came. All I did was take a magnifying glass to focus on what JD was doing for our students and our community. We have a saying around here that ‘those people in Montgomery aren’t sending us money for anything but students.’ Every decision we make is for the good of the students.”