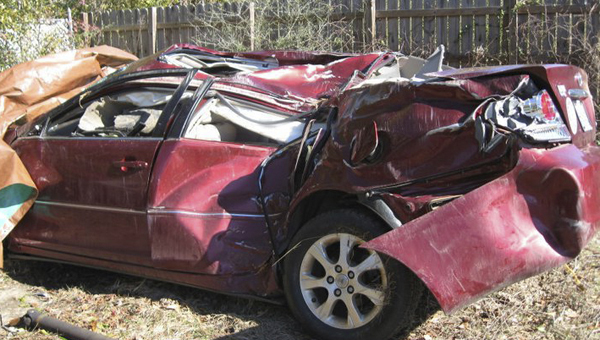 A 2-year-old girl remains in critical condition after a wreck last weekend on U.S. 31 north of Brewton.

The girl was injured along with her mother and another child in the one-vehicle accident.

The mother, Jessica Rose, was expected to be released from Sacred Heart Hospital in Pensacola, Fla., Thursday after being treated for a variety of injuries.

Arrianna Rose, 2, remains in critical condition at the Pensacola hospital, according to family members.

Alison Rose, grandmother of the toddler, said Jessica’s injuries were severe, but doctors had repaired damage enough to release her from the hospital.

“She has been through a lot,” Alison said. “She had a lot of trauma to her body. She had shoulder surgery where they put in a plate. She had a ruptured spleen and was bleeding from the liver. She had punctured lungs, a broken sternum and broken ribs. She is getting better.”

As for the toddler, Alison said doctors are keeping her listed in critical condition due to the severity of injuries she received in the wreck.

“She is still in critical condition,” Alison said. “She had a good bit of head trauma. She has not regained consciousness since the accident.”

“Even after the surgery she is having some seizures,” Alison said. “Because of the head trauma that is happening.”

Alison said doctors would be moving forward with treatment to help bring Arrianna to the next level of recovery.

“The doctors said they will begin backing down on some of her medication,” Alison said. “They are also going to try to wean her off of the ventilator, too. We are just hoping for the best.”

Victoria Jackson, 13, was also injured in the accident but was released following treatment for her injuries.

Jessica and Victoria were ejected from the vehicle when the accident occurred, Alison said.

“Jessica and Tori were ejected from the car but Arrianna was still in her car seat when people got there,” Alison said. “Tori was treated for an injury to her shoulder and was released.”

Jessica and Arrianna were taken to Sacred Heart Hospital by Lifeflight while Victoria was transported to the same hospital by ambulance, Alison said.

Alison said the first two people on the scene were the right people at the right time.

“The first person on the scene was Helen Roberson, a nurse from Castleberry and a cousin of mine,” Alison said. “It was certainly a divine appointment. An ex-police officer came up right after the wreck and was able to break out a window to get the baby out.”

Alison said the two Samaritans were able to get Arrianna out of the car seat and get her ready to receive medical attention.

Alabama State Troopers said the accident occurred just after 1:30 p.m. Dec. 12 on U.S. 31 near the intersection of Kirkland Road just north of Brewton. The one-vehicle accident remains under investigation.