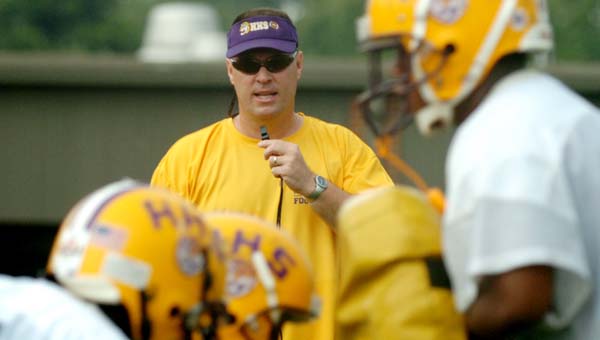 Doug Hoehn said Friday he is looking for improvement on the W.S. Neal football team next year, a day after he was hired as the new coach and athletic director.

Hoehn, 47, was most recently the head varsity football coach at Hattiesburg High School in Hattiesburg, Miss., before resigning from that post Thursday after being selected for the W.S. Neal job.

“We are excited,” Hoehn said after touring the school with his wife, Lisa, Friday. “I think what interested me in the job was when I came down here and met the folks,” Hoehn said. “I met the folks on the search committee, the superintendent, the assistant superintendent, Mrs. Frazier and just had a good feeling about the place. I went home and talked to my wife about it and came back again and looked at the area and when they offered the job, I was excited to take it. Just mainly it was the good feeling I had and felt like it would be a good place to be.”

Hoehn will replace Kevin Jordan, who resigned last month after an 0-10 season.

“My expectations are that you want to see improvement,” Hoehn said. “My expectations for the kids are for them to work hard and play sound fundamentally and to learn the scheme of where we are going and to play with class. I want them to conduct themselves in a positive manner on and off the field. I want them to be competitive in the football games that we will play in.”

W.S. Neal principal Patty Frazier said she was very impressed first off with his level of professionalism of Hoehn.

“He has a master’s in education and much classroom experience, also, a lot of football experience and athletic experience,” Frazier said. “His interviews were wonderful. He gave a lot of personal information about himself and his professional information and he conducted himself very well. I could find no reason not to like him. I was very impressed with abilities to address the questions that were asked of him and his whole demeanor and his passion for athletics and developing young students.”

Frazier said the school had several very good applicants in the process.

“It was an unanimous decision,” Frazier said.

Hoehn coached at Hattiesburg for five years, compiling a 32-28 record at the school, which was both 5A and 6A during his tenure. The school had not won a playoff game for six years prior to his arrival.

Hoehn’s record was 4-7 this past year, a rebuilding year for Hattiesburg, which started 12 sophomores and one freshman in 2010.

Hoehn’s overall record is 73-55 in 11 seasons, with seven playoff appearances and one state championship appearance in 2000 with the 2A Potomac School.

Hoehn said he has not me the players yet, but will not be able to meet the kids until after the break and he would know more about the players once he is able to evaluate everything a little more.

Hoehn will be the fourth Eagle coach since the 2003 season. The past three Eagle head coaches stayed a combined eight years and went a combined 38-48.