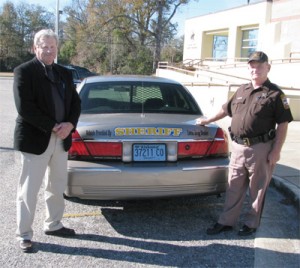 A man arrested on drug charges has made it possible for the Escambia County Sheriff’s Department to put a new vehicle in the fleet.
Sheriff Grover Smith said the vehicle, a 1998 Grand Marquis, was seized during a drug arrest over a year ago.
“We made a drug arrest and the dealer’s car was seized as a result of that arrest,” Smith said. “The process to take ownership of the vehicle and get it set up as a part of our fleet.”
Smith said the year-long process to take ownership is one that is necessary to make the acquisition legal and binding.
“There is a forfeiture process that we have to go through to take permanent ownership of any seized vehicle,” Smith said. “That process can be lengthy but it is necessary. We’re thankful that we were able to add this vehicle to our fleet. It certainly saved the department some money when it comes to replacing a vehicle.”
The vehicle will be used as an inmate transport vehicle with Charles Reardon at the wheel.
“It’s a good car,” Reardon said. “I’ll be driving this one and it’s going to be a good ride.”
Smith said the car has been decked out with all the essential equipment suitable for its intended use.
“We’ve installed radio equipment and a cage at the back seat,” Smith said. “It’s gotten a new paint job and appropriate decals and striping to make it recognizable as a part of the Escambia County Sheriff’s Department fleet of vehicles. Getting this vehicle ready only cost about $1,000. That’s considerably less than the cost of a new vehicle to replace one.”
Smith said the new addition at the Department has already been put into operation.