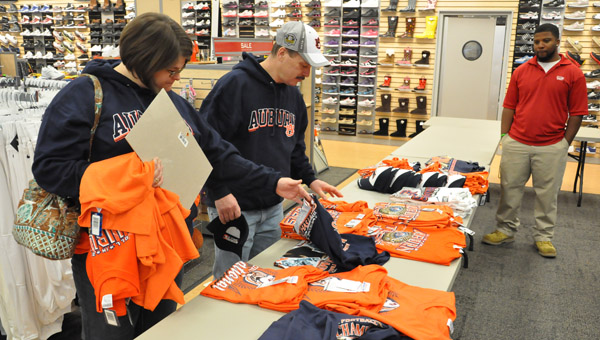 It was only fitting that the song playing over the speakers inside Brewton’s Hibbetts Sports Tuesday morning as Auburn fans were shopping was “Eye of the Tiger.”

Tiger fans were steadily shopping for BCS National Championship apparel after their team claimed a 22-19 win over the Oregon Ducks Monday night in Arizona.

Store manager Chastity Robbins said the shoppers Tuesday morning were nothing like the crowd Monday night after the game.

“Busy,” Robbins said describing business at the store. “Before the game was even over we had people in the parking lot waiting to get in here. We did over $4,000 in two hours. We stayed open until 1:30 a.m. after the game and it was busy.”

“We had one person in parking lot this morning, but since we opened, we have been busy,” Robbins said. “All four or five tables we had were full of shirts and you see how much is left (only a few shirts on two tables).”

Robbins said the official championship shirts were not in her store yet, but were coming.

“We have not got those yet,” Robbins said. “My district manager went to Atlanta and different places, but they are snowed in up there to get the stuff back to us so we don’t know what all we are going to have. Right now, we have championship hats and shirts along with our regular Auburn stuff. We will be getting other things in, we just don’t know when it will be because they are snowed in.”

Bonehead Boots owner Sheri Davenport said her store also has Auburn merchandise, and she plans to order Guy Harvey shirts that commemorate the title. The store also has some non-traditional sports items with the Auburn logo.

“We’ve got earings, bracelets and Mojos are supposed to be coming in soon,” she said.

“We just did what we needed to do,” Faith said. “It feels very good. This season was a great season. All the players did a terrific job, and we are proud to be an Auburn Tiger.”

Garrick Lewis, 20, a Hibbett Store employee and Alabama fan, was helping Auburn fans with their selections.

“I am a die-hard Alabama fan, but I am proud of them winning,” Lewis said. “I at least wanted to see someone from the state of Alabama to bring it back and win it. They played hard and were very competitive. I got scared for a minute there, but they pulled it out.”

“I will always be an Alabama fan, but when it comes down to it, I will always give Auburn credit,” he said. “I even thought about just buying a shirt just for the heck of it. I am proud of them. It makes it great (for both Alabama and Auburn to have won the title back-to-back). You can be proud of your state. You can be proud of Alabama for winning it last year and you have the same thing this year with Auburn.”

The Tigers capped off a 14-0 record this season with the win.

Former W.S. Neal players Jamar Travis and Jared Cooper were on this year’s team, and former Eagle Scott Fountain is a coach on the team.