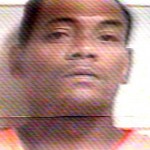 A traffic stop led to a tussle and then an arrest last week for drug task force agents.

On a routine patrol Thursday, agents with the task force stopped a truck and trailer with no trailer lights on Pea Ridge Road.

The driver gave the wrong identifying information, so agents asked him to exit his truck, according to law enforcement reports.

The driver refused to comply, and a brief struggle followed, agents said.

The suspect was arrested and identified as Christopher Michael Spears, 38, of Lavon Lane in Brewton.