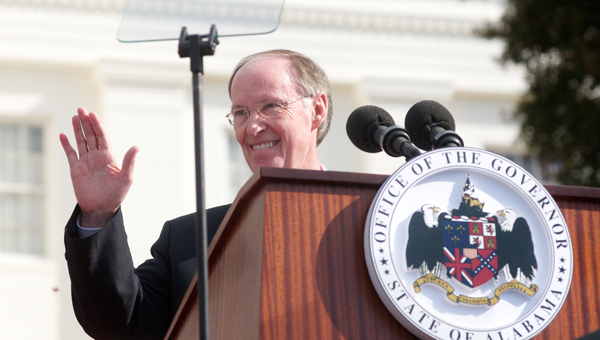 During the service, Bentley said, “If you have been adopted in God’s family like I have, and like you have if you’re a Christian and if you’re saved, and the Holy Spirit lives within you just like the Holy Spirit lives within me, then you know what that makes? It makes you and me brothers. And it makes you and me brother and sister. Now I will have to say that, if we don’t have the same daddy, we’re not brothers and sisters. So anybody here today who has not accepted Jesus Christ as their savior, I’m telling you, you’re not my brother and you’re not my sister, and I want to be your brother.”

The statement, made before his inauguration later that day, drew criticism from Jewish leaders and other religious leaders in the state, and also drew national attention.

Bentley met Wednesday with leaders from the Montgomery and Birmingham Jewish communities.

“It was never my intension to disenfranchise anyone”, Bentley said. “If I did make anyone of any faith feel disenfranchised, let me say I am sorry.”

Bentley reiterated his pledge made during his inaugural address that he intends to be the governor of all of Alabama.

When asked at a press conference following the meeting, if he considered those attending to be his brothers and sisters, Bentley said, “Yes, yes I do.”