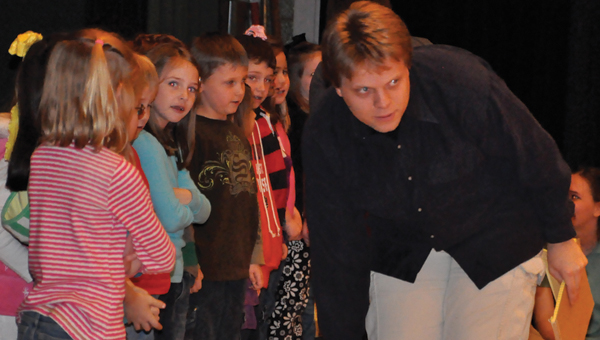 Hoping for a part in an on-stage production, 100 local students crowded onto the stage Monday to audition in front of two directors with the Missoula Children’s Theatre.

At the end of auditions, 54 students were chosen for roles in the show set for Saturday while four were chosen as assistant directors.

Madelyn Cave, president of the Brewton Council of the Arts, said the number of students on hand for Monday’s auditions was exciting and record-breaking.

“This is the most we have ever had turn out for auditions,” Cave said. “This was especially exciting since it was also a school holiday.”

The 2010 performance marks the fourth year Missoula Children’s Theatre professionals have been in Brewton to produce a show filled with local talent. “Alice in Wonderland” will be presented Saturday at 7 p.m. at the Woodfin-Patterson Auditorium on the campus of Jefferson Davis Community College.

MCT directors for the production are Caitlin White and Steven Douglas Thomas.

Cave said she is pleased to see some changes in the student auditioning for roles in the production.

“We saw an increase in boy participants as well as an increase in older students’ interest in the play. We had more upper-middle school and high school students this year.”

Cave said many of those auditioning Monday were returning cast members from previous events with new faces scattered throughout the hopefuls.

“Many former cast members auditioned this time,” Cave said. “There were many who were auditioning for the first time.”

The auditions covered a two-hour span Monday with students showing off their abilities of delivering lines, singing and even a little dancing. Cave said all of the students seemed excited about the event.

“The energy was high during auditions,” Cave said. “Caitlin told me that our town has a lot of talent. She said this was the largest audition she has held. Both Steven and Caitlin were impressed with our stage and auditorium. We are very fortunate to have such nice facilities at JDCC.”

Rehearsals for the show will continue throughout the week from 3:30 to 8 p.m. each evening and additional rehearsals on Saturday prior to curtain time at 7 p.m., Cave said.

Tickets for Saturday’s show are included for those who purchased season tickets. Other tickets will be available at the door at a cost of $10 for adults, $5 for students 6 years and older; $1 for children ages 3 to 5 with children under 3 admitted free.