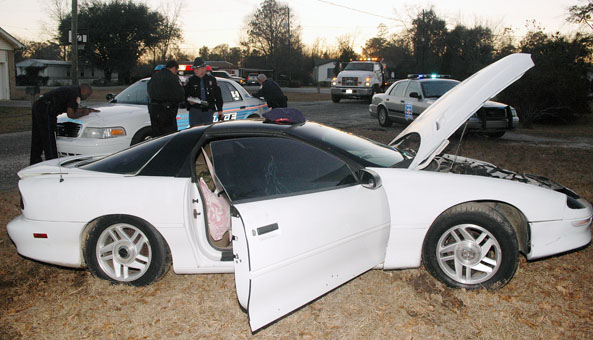 A Baldwin County woman is behind bars after she crashed her car during a high-speed chase while eluding officers Wednesday afternoon off Jack Springs Road.

According to officers at the scene, an Alabama State Trooper pulled over the woman, whose name is being withheld pending investigation, in Baldwin County for an apparent traffic violation. As the trooper approached the vehicle, she sped off in her white Chevrolet Camaro leading him on a high-speed chase on Interstate 65.

Officers with the Atmore and Poarch police departments were called for assistance as the trooper approached Escambia County. The woman continued to elude officers as she exited Interstate 65 at Exit 54 and continued on Jack Springs Road. As she neared Atmore city limits, officers with the APD joined in the chase, which ended when the driver attempted to turn onto Maple Drive at a high rate of speed and crashed into a ditch.

Officers quickly detained the suspect and later learned that she had outstanding felony warrants for theft.