Military plane made noise over Brewton 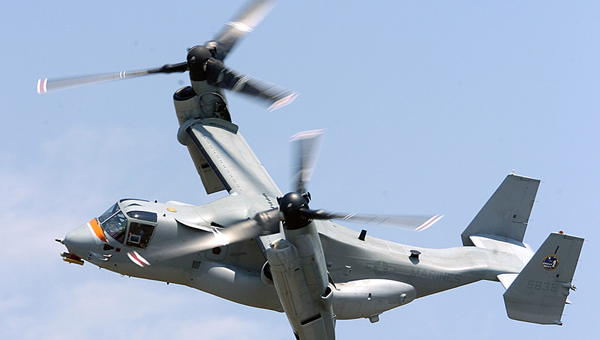 The crew from “Unsolved Mysteries” won’t be coming to Brewton to investigate strange rumblings heard across the area Wednesday night.
Brewton Municipal Airport Director Earl Lambert said the noises heard throughout the area can be attributed to the massive V22 Osprey — a twin rotor helicopter/airplane owned by the military.
“After hearing the machinery, we began to investigate the source,” Lambert said. “Our investigation lead us to the special ops unit from Hurlburt Field.”
Hurlburt Field, located near Fort  Walton Beach, Fla., is home to the Airforce Special Operations Command.
“I spoke to the commander of the squadron and explained their training would not be good since we have so many citizens that live in the area around the airport,” Lambert said. “Those aircraft are extremely noisy with an horrific racket.”
The Brewton Municipal Airport serves as a training area for units from Whiting Field near Milton, Fla., during the day.
“We have a 50-year agreement with the Navy, and you just can’t mix the two,” Lambert said. “It would be prohibitive for them to use the area during the day when it’s being used by the Navy, and it’s just too noisy at night.”
Lambert said a gentlemen’s agreement was reached between himself and the commander Friday that would bring the training missions to a halt.
“The commander offered an apology for any inconvenience their training may have caused in the community,” Lambert said. “He assured me the squadron would not be back in the area to train.”
The Brewton Municipal Airport is a non-controlled facility, meaning there is no air traffic control tower and no after-hours communications system.