Who will be next mayor? 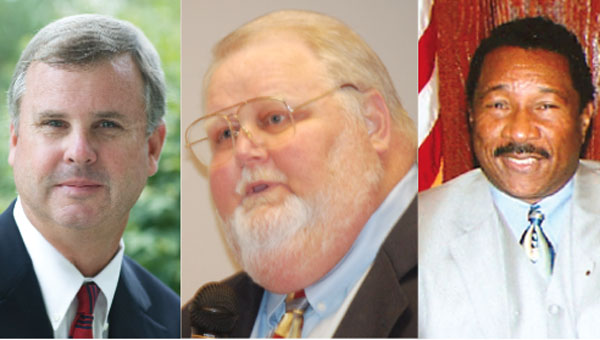 Frank Nalty is so ready to run, he already has stickers.

Days after Ted Jennings announced he would not seek election to a seventh term, the Brewton businessman has been the first to officially wade into the next mayor’s race, while others are testing the waters.

Councilmen Fred Barton and Dennis Dunaway also said they are mulling a run for mayor in 2012.

Nalty, who owns Nalty Land and Timber, said he wants to lead the community he calls home.

Nalty has served for several years on the city’s planning commission, which he said has given him insight into some difficult decisions for the city as well as opportunities.

While Brewton’s industries are surviving — and in many cases thriving — during the economic downtown, Nalty pointed out that the city’s tax revenue has taken a hit.

“The city belt is already tightened,” he said. “We’ve got to survive by being lean.”

Attracting industry — by spreading word about Brewton at trade shows and other recruiting meetings — would be a top priority, Nalty said.

Nalty also said he supports the proposal to build a community center at the old Brewton Middle School property and would like to see a farmer’s market downtown.

Nalty also said he would like to see better infrastructure and a solution to Brewton’s recurring flood problem.

Barton, who serves District 5 as a councilman, said he was shocked by Jennings’ announcement Tuesday, made at the end of the council’s regular meeting.

“I was hoping that he would serve one more term,” Barton said. “I have felt honored to have served the city with Mayor Jennings; I wish him and his family the best.”

Barton said he will not rule out running for mayor.

Barton said he has a “vision and a blueprint to move our city forward.”

“With our struggling economy, we still strive for a better quality of life for all our citizens, with economic development and infrastructure on my list as a priority,” he said. “I believe I can make a difference.”

Dunaway, who serves in Council District 1, said he is also considering a run for the office.

“I’ve been talking to some other people,” he said. “I can’t say for certain yet.”

Dunaway said Jennings’ announcement does not change a lot in the city in the immediate future.

“What he’s done over his terms has been excellent,” Dunaway said. “He has always done what is in the best interest of the city. The key to great city government is not just a good mayor but a good council.”