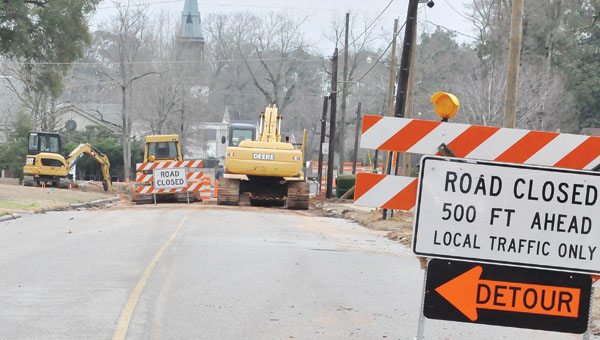 Work on a sewer project that has blocked Belleville Avenue for months is long behind schedule — and could take another two months to complete, city officials said.

But the construction company will now be assessed fines for missing the deadline, as city officials and residents along the work route are growing concerned over the inconvenience being caused by the delays.

Ray Madden, supervisor of the Brewton City Gas and Water Department, said the work that was originally expected to be completed in December will now continue through the spring.

“We met with the contractor and they are now telling us it will be April before the work is complete,” Madden said. “We are all anxious to get the project completed.”

With the project passing deadline after deadline, Martin Construction of Atmore will now be forced to pay for the delay, Madden said. The project began last July.

“The original completion date was supposed to be Dec. 15,” Madden said. “The date was moved up to Jan. 28. Their contract time is up, and it looks like it could be another 60 days before they’re done. That delay is going to cost them $500 a day until the work is complete in liquidated damages. They will now be working weekends to complete the job as quickly as possible.”

Madden said workers with Martin Construction were expected to lay an asphalt cap on the street section between Underwood and Halsey streets Monday, however weather conditions hampered the work.

“Work has just about been completed in the section between Underwood and Halsey streets,” Madden said Monday. “We had hoped to see that first layer of asphalt go down today (Monday), but with the rain that just didn’t happen.”

Madden said workers have been hampered by more than the weather since work on the underground utilities began in July 2010.

“There have been some issues along the way that took some time to correct,” Madden said.

Finishing the work is something some Belleville Avenue residents are hoping to see soon.

Tim Cook lives amid the construction area with his family. He said they have had their own construction issues throughout the process that’s been ongoing for nearly five months.

“It’s a mess,” Cook said. “There have been times that we have been without water and without electricity. They have had their issues, and it has caused us some problems, too.”

Cook, who lives just north of the Halsey Street intersection on Belleville Avenue, said he’s concerned about the time it has taken to see the current amount of progress.

“The crews had cleared things up to our house by the day before Christmas,” Cook said. “Here we are at the end of January, and they haven’t even gotten to our house yet.”

Cook said he is hoping the construction being done will help eliminate some problems his family has seen over the years.

“I know that it will eventually get fixed,” Cook said. “I don’t have a big beef with them except for the inconvenience. I’m looking forward to having good clean water when all of this is done.”

Cook said he is growing more concerned for safety throughout the area — more than the disruption in travel routes.

“This really has been going on way too long,” Cook said. “I’m concerned a lot about safety for the folks who live here. It concerns me about how a fire truck or ambulance would be able to get to some of those houses along the construction site. With construction equipment left in the street, it would be a tough thing to do.”

Cook said he’s feeling the pain and will still be caught up in the “mess” for as long as the construction takes.

“We are still going to be in the middle of all of that when they move on up Belleville,” Cook said. “I’m just concerned about all the traffic that will have to be rerouted. With the school, the library, the hospital, the medical center and the shopping center right here together, the traffic detour is going to continue to be a mess.”

Madden said the next phase of work will have Belleville Avenue closed from Halsey Street to Smith Lane.

“Smith Lane will actually be closed at Belleville Avenue,” Madden said. “Traffic will be detoured so that people can still get to the Brewton Medical Center. We hope this phase moves quickly.”

Madden said the next phase of the work is important to the sewer system in the area.

“I really want to see the sewer system work completed in that area,” Madden said. “We’ve had some problems in that particular area, and the workers will certainly be glad to see it complete.”

City officials will continue to meet with contractors on the project to keep on top of progress and a projected end date.

The current work will be the final phase of seven projects funded by a $1.4 million grant awarded to the City of Brewton by the Environmental Protection Agency.