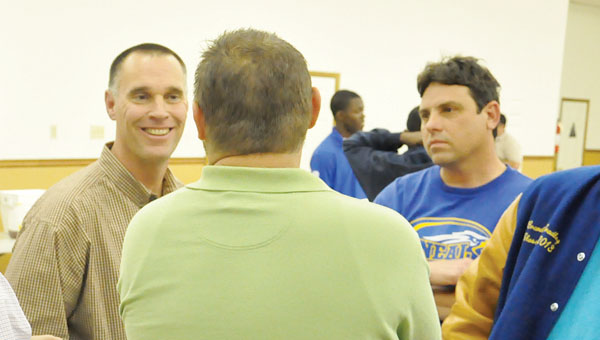 Despite rain and thunderstorms in the area Tuesday night, a host of W.S. Neal football players, family, friends, and fans braved the elements to hear from new Eagle head football coach Doug Hoehn at a meet-and-greet cookout at the East Brewton Civic Center.

“We just thought it would be good for everyone in the community to come out and get to know coach Hoehn,” W.S. Neal quarterback club president James Grantham said. “I think it was a pretty good turnout tonight considering the weather. He was able to go around tonight and meet a lot of people. I think he will bring discipline to our program. He knows football. He has won everywhere he has been. I think he will bring us back up. He is an overall good guy.”

“I think it is a great turnout,” Hoehn said. “It is great to meet a lot of folks and I am happy about it. I have been so busy since I got here. I started winter workouts the day after I got here, so we have been doing that for three weeks or more now. What I am hearing is a lot of excitement from folks and that they want to see good high school football in East Brewton. You want to coach athletics where people want to see good things. You don’t want to be somewhere where folks don’t care.”

Hoehn said he is impressed by the team so far.

“In the last three weeks it has been good,” Hoehn said. “I was speaking with one of the assistant coaches today and I asked him ‘How many three weeks are there going to be where we improve this much?’ I wonder when we are going to hit the wall because we have improved so much in three weeks.”

Right now, Hoehn said the Eagles are going to stay in the weight room because they need a lot of that.

“I am going to hold off on my spring until the last moment,” Hoehn said. “Basically that is for three reasons because I am new, my system is new and we need to be in the weights and watching film and that is what we are doing. I am giving them time to learn and get stronger. We are getting in shape and running and that is giving them time to learn our system on the chalkboard and in film session. I think the later we go, the more kids we will have that are involved in spring sports right now.”

Cam Blackman will be a junior for the Eagles in 2011 and said he is excited about coach Hoehn.

“I think the season will hopefully be better than last season,” Blackman said. “I think he is going to do a lot. Since he has been here, there have already been a lot more changes in the weight room. He knows what he is talking about.”

“I like coach,” Godwin said. “He enforces discipline and he gets our attention, especially in the weight room. We have been working out, and he has changed some things since last time. I think we will be good this year mainly because he has enforced the discipline. He has been working on the field house and making sure we keep our pride in Neal. The main thing is our pride and discipline.”

Hoehn coached at Hattiesburg for five years, compiling a 32-28 record at the school, which was both 5A and 6A during his tenure. The school had not won a playoff game for six years prior to his arrival.

Hoehn’s overall record is 73-55 in 11 seasons, with seven playoff appearances and one state championship appearance in 2000 with the 2A Potomac School.

He will replace Kevin Jordan, who resigned last month after an 0-10 season in 2010.