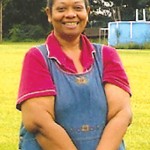 A 48-year-old female missing from the Freemanville area over a year ago may be in or around the Brewton area.
Linda Knight Douglas, who was reported missing last year by sisters Carolyn Brown and Catherine Johnson said their sister, was reportedly in the Brewton Wal-Mart recently.
“About four months ago, someone reported seeing here at the Brewton Wal-Mart,” Johnson said. “We don’t know where she is. That is all we know. They called my mother and told her they had saw her at Wal-Mart. Before that, she was last seen at the Poarch Bingo Palace.”
Johnson said her sister is much smaller now (than the picture) and walks with a “hop” after having a stroke.
“She wears her hair up,” Brown said.
Johnson said Douglas was living in Freemanville with their mother.
“She just walked off one day,” Johnson said. “We have not seen her since.”
“We think she is living her now, in Brewton,” Brown said. “I filed a report with the Atmore Police Department last year.”
If anyone has seen or has any information on Douglas, they can call Brown at 251-294-2582 or Johnson at 251-368-8766.
“They can also call our mom at 251-368-9192,” Johnson and Brown said. “We just want her to come home or call home. We just want to know where she is.”