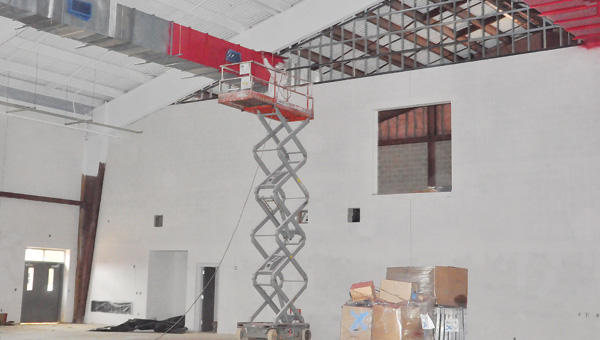 With the roof up and the tile down, workers building the new Brewton Middle School were painting and wiring last week as the bulk of the interior work on the facility continues.

Wider hallways, larger classrooms and a black, red and gray color scheme are all part of the new construction, which is set to open in fall 2011, as long as construction stays on schedule.

“We are so excited,” said Principal Doug Prater, who tours the new school at least once a week. “These next four to six weeks are critical.”

The two-story entrance to the school will lead visitors past the new media center.

“We want visitors to see the kids working,” Prater said.

Most classrooms in the new school will be about 900 square feet — larger than the ones in the current school — and will be equipped with teacher workstations, computer banks and technology stations.

Each grade will have its own wing of classrooms, with its own set of restrooms — which are already outfitted with a stripe of black and red tile on the walls.

The center of the school houses the offices, media center, cafeteria and large rooms for chorus, band and art. Although the media center will have the same technological capability and resources it does now, Prater said classrooms will also have those resources, which will give students more places for research and study.

The school will also have a competition gym and P.E. gym.