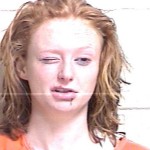 An East Brewton woman spent the weekend behind bars after offering assistance to police officers during a traffic stop Saturday night.
Crystal Mealer was arrested Feb. 4 after an altercation with officers who were working on a separate incident.
Police Chief Kenny Brazile said officers with the department had made a traffic stop along Forrest Avenue when the incident that put Mealer in jail occurred.
“Our officers were already in the middle of a traffic stop on a speeding vehicle,” Brazile said. “Miss Mealer stopped at the scene and said she was there to offer assistance. I’m not sure whom she planned to assist, but my officers told her she needed to leave the scene. She insisted that she needed to stay since she intended to become a police officer. She told the officers she had even picked up an application to become an officer.”
Brazile said officers began to suspect Mealer may have been intoxicated and questioned her about that possibility.
“After having a discussion with Mealer, the officers made the decision to perform a street Breathalyzer test on the subject,” Brazile said. “When she failed the test she began to fight with the officers.”
Brazile said officers were forced to use tasers on Mealer twice and also used mace to subdue the subject.
“The officers reported that she (Mealer) kicked at them, tried to bite them and even tried to grab a firearm from an officer,” Brazile said. “She was arrested for her assaults on the police officers and is facing several charges.”
Mealer was transported to the Escambia County Detention Center where she was booked on charges of assault, resisting arrest, driving under the influence and criminal mischief.
A bond hearing was scheduled for Monday afternoon.