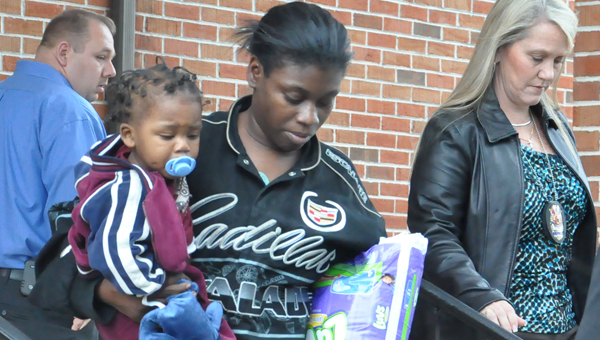 A Pensacola, Fla., woman and her 17-month-old son were reunited Wednesday morning after the child had been the subject of an Amber Alert issued Tuesday evening — an event that has put one man behind bars.

Monica Slater came to East Brewton’s Police Department Wednesday just before 11 a.m. where she was reunited with her son who had left her care with an ex-boyfriend Tuesday evening in Pensacola, Fla.

Keith Square, Sr., aka Keith Squaire, Sr., 36, has been charged with kidnapping and was also wanted in Escambia County, Fla., for violation of probation.

“We had been working the case through the night and into the morning,” Brazile said. “At 6 a.m., additional tips and leads were released in an updated Amber Alert. We began to investigate those leads and were able to take custody of the child at the station.”

Brazile said proper agencies were notified and members of the Department of Human Resources were overseeing the care of the child until he was reunited with his mother.

“Following the return of the child, our officers continued investigating the case in search of the suspect,” Brazile said. “Officers from several agencies were working together when he was apprehended.”

Square was taken into custody by Pensacola Police Sgt. Stephen Davis and Detective James Gore along with officers from the East Brewton Police Department.

PPD Capt. Paul Kelly said Davis and Gore were interviewing one the suspect’s relatives on Crenshaw Street just outside of East Brewton when the suspect walked up to them and turned himself in around 10 a.m. Wednesday.

As officers waited at East Brewton Police Department to transport Square to the Escambia County Detention Center, a relative of the suspect recounted the incident that found the child returned to authorities.

A man identifying himself only as Mickey, said he was Square’s cousin and that he had brought the child to police.

“I brought the baby down here,” Mickey said. “This wasn’t an abduction. He loves that baby.”

As Square was escorted from the EB police department, he said, “I love my baby,” to reporters who asked why he took the child.

Pensacola Police have identified the child as Keith Square, Jr., although he is not the biological son of the suspect.

Davis said Square had asked for permission from Slater to take the child to visit friends Tuesday evening around 3:40 p.m. and the mother agreed.

“Square later called Slater and told her she’d never see the baby again,” Davis said. “Square called Slater several times threatening to harm the baby and also said that he and the baby ‘would not be taken alive.’”

Slater reportedly called 911 just before 9 p.m. to report the incident and convey the phone call contents to police. Law enforcement then issued the Amber Alert around 10:30 p.m. Tuesday prompting a massive manhunt by law enforcement agencies in Florida and Alabama.

Square was transported to the Escambia County Detention Center where he will await an extradition hearing before being taken back to Pensacola, Fla., to face the charges against him.