At least two people were transported to D.W. McMillan Memorial Hospital around lunch time Tuesday after two cars collided in front of Southern Pine Electric Cooperative on U.S. 31. Witnesses said it appeared one of the cars tried to pull out from the Southern Pine driveway and did not see an oncoming car on U.S. 31. Conditions of those injured dii not appear to be life-threatening according to witnesses. 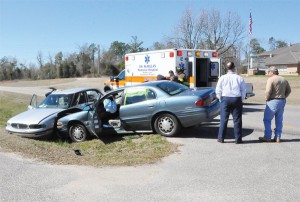