Layton honored as Citizen of the Year 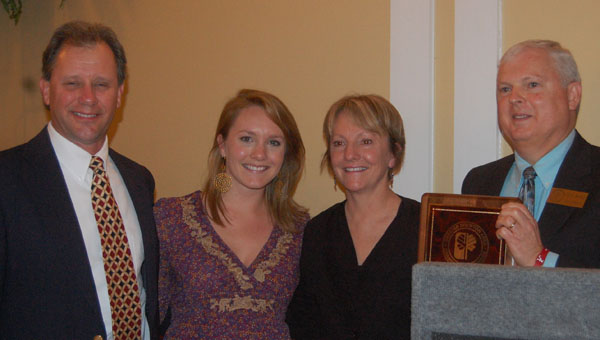 Three individuals were honored Thursday during the annual Greater Brewton Area Chamber of Commerce banquet.
Plaques were presented to the families of the late W.S. Neal High School principal, Phillip Ellis, and the late T.R. Miller High School principal, Donnie Rotch in honor of their commitment to Youth Leadership Brewton.
The Citizen of the Year was “overwhelmed” upon being announced the recipient of the annual award that was presented following a long list of accomplishments by the honoree.
Vivian Layton said the honor is one for which she is grateful.
“I’m overwhelmed,” Layton said as she accepted her award. ”It is such an honor to be part of such a big family. Because you said yes, we have something great – we have the Y.”
Layton, who serves as the fitness director at the Brewton Area YMCA, learned of the award as Stephanie Walker told of her accomplishments that span more than two decades in the Brewton community.
“She has invested almost 25 years bringing the vision (of the YMCA) to life and expanding it creating connections throughout our community,” Walker said. “Long before partnership and collaboration became buzz words, Vivian was considering and implementing the possibilities.”
A laundry list of activities in which Layton was involved, some begun by her work, her commitment to the betterment of the community is evident.
“She is highly enthusiastic, an excellent listener and willing to focus from another’s perspective,” Walker said. “She does not see obstacle to implementation of new projects, she sees opportunities. That’s what makes our YMCA the asset that it is.”
As a member of the staff at the YMCA, Layton has been involved with programs to benefit public schools, the Brewton Arts Council, American Cancer Society, Youth Police Academy, the American Red Cross, Boy Scouts, Archery Association, the Escambia County Extension Service and D.W. McMillan Hospital.
“She has mentored numbers young people by supervising lifeguards, training after school and summer camp counselors so they can work with children, handle difficult safety and parent issues, learn responsibility and understand the concept of team as it applies to their co-workers,” Walker said. “She is a mentor for young parents who have children in the YMCA’s childcare program and is ultimately responsible for 66 preschoolers, numerous children in the nursery, and of course, children in the after school program.”
Walker said Layton’s’ service to the YMCA was only part of the reason she is deserving of the honor of Citizen of the Year.
As a community member, Layton has worked with the Kiwanis and has been a member of the Chamber Board, Red Cross Board, advisory board at Escambia County Technical School and served on the Vestry of St. Stephen’s Episcopal Church.
“She’s sung in the community choir and helped Habitat paint house,” Walker said. “She has served as an officer in parent organizations at every school her children attended. She ran the visitors concession stand at football games and is currently working on the Healthy Communities/Health Children initiative to fight childhood obesity. She’s taught Sunday school, supervised VBS, Parish life, the food ministry and her church’s outreach to young adults. And, she has been invaluable to me as a shopper for the Christmas project for almost 20 years.”
Walker said a special quality of Layton is the way she quietly notices individual needs of others.
“The Y is fortunate to employ her,” Walker said. “Brewton is lucky she chose to live here. And each of us is blessed that she shares her talents so willingly.
Family of Ellis and Rotch were on hand to receive honorary plaques for principals, Phillip Ellis and Donnie Rotch. Ellis served at W.S. Neal High School from 1972 until his death in July 2010. Rotch served T.R. Miller High School from 1974 until his death in August 2010.
Chamber president Don Ward read from the plaques as each of the men were recognized for their support of the Youth Leadership project of the Chamber.
The plaques were presented to family members in honor and in memory of Ellis and Rotch for their “commitment to excellence and dedication to improving the education and lives of the youth in this community through involvement in the Greater Brewton Area Youth Leadership Program, and most importantly through the character and leadership displayed during (their) lifetime.”
Ellis died in July 2010 after a yearlong battle with cancer. Rotch was killed August 2010 in a fatal automobile crash on U.S. 31 North.