Bronner: Move on from tanker loss 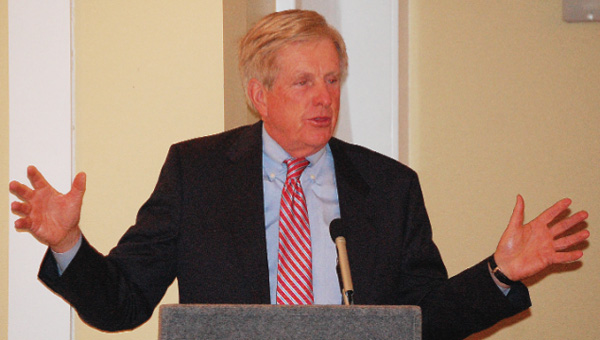 Alabama has made greater strides than any other state in the past 15 years, Retirement Systems of Alabama CEO David Bronner told Brewton chamber members Thursday night.
But a setback like the loss of the Air Force tanker contract for Mobile cannot cause the state to move backward, he said.
“We have to pick up the pieces and move again,” he said.
Bronner, the keynote speaker for the Brewton Area Chamber of Commerce’s annual dinner, said he had been involved in the potential EADS project for eight years, and he said he thinks aerospace industries still have a future in Alabama.
Bronner was also involved in luring Mercedes to the Tuscaloosa area, a project that tipped off the spread of automotive manufacturing in the state.
“Alabama has made more progress in the United States in the last 15 years,” he said. “It started with Mercedes. What scares me is topping out. If you go back in the closet for a year because it’s a difficult economy, you’ll lose all your momentum. I think Alabama has too bright a future to do that.”
But Bronner said the state and its leaders need to make some tough decisions to ensure that Alabama stays ahead.
He noted that legislators — including those who were in attendance Thursday night — were about to embark on the “toughest year of their lives.”
Lawmakers have said that the coming fiscal year — with little new growth in the economy and less federal emergency funding — could lead to deep cuts in the general fund budget.
“It’s going to take real guts on the part of legislators,” Bronner said.
Alabama has one of the lowest tax rates in the nation — and that could hold the state back, Bronner said.
“We have made really huge progress,” he said. “And we did that with the lowest taxes in America. But you can’t compete in this world with the tax rate being the lowest.”
Bronner praised Brewton and Escambia County for its support of school tax referendums, however.
“You have decided that you want to be better,” he said. “Industries go where you are interested in education.”