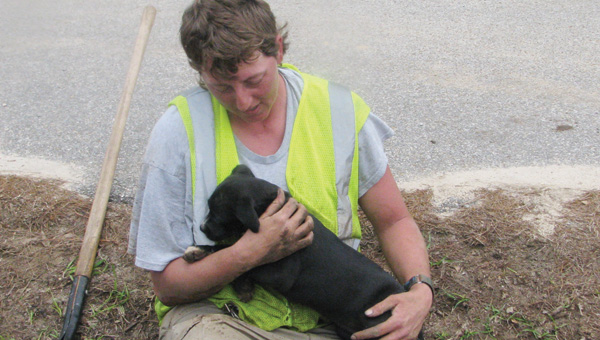 An East Brewton employee went above and beyond her duty Thursday when she rescued a puppy from a drainage pipe on Maddox Street.

Homeowner Evelyn Edwards, who lives on the street, said she and her mother had just come back from shopping and were sitting on the front porch, when they saw two puppies come out of one end of the drainage pipe.

“I told my mother to look at the puppies coming out of the pipe,” Edwards said. “As we sat there on the porch, I began to hear some cries from the ditch and went out to see. From one end of the ditch, I could see the puppy’s tail wagging and from the other end I could see her eyes. She was so pitiful but she was too stuck to get out by herself. I called several places trying to get some help. I couldn’t get down in the ditch myself because of a bad back, but I kept on calling. I called the utility department and they said they would see if anyone would come.”

There was one person that spoke up and volunteered to see what she could do. Tabitha Lucas works with the utility department for East Brewton and has dogs of her own.

When Lucas arrived she rigged up a hoe to a long pipe and began to dig. After two hours of digging and begging the puppy to try to do some digging of her own, Lucas got out of the ditch in order to give the puppy some room and, sure enough, in a minute the little black puppy wriggled out. The first person the puppy saw was her rescuer. After watching that face at the end of the pipe for two hours, the puppy knew who to thank and then she was ready for some food.

Lucas carried the puppy home with her and was hoping to find her a new home, but the owner of the bulldog came forth and now all is well. The puppy is back home with the little boy who didn’t even want to go to school until the puppy was found.