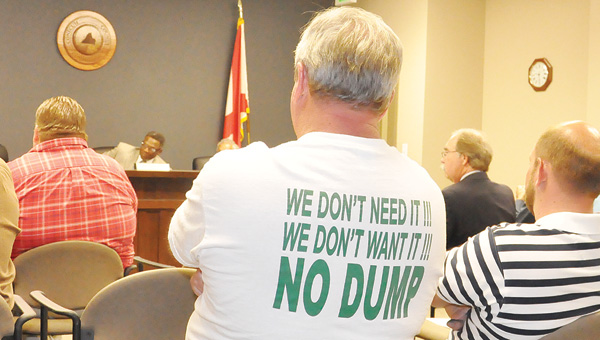 Conecuh County officials are seeking an attorney general’s opinion on how the governor’s moratorium on large landfills affects the application process for a 5,100-acre landfill near Repton.

Meanwhile, the chairman of an anti-landfill group on Monday thanked Gov. Robert Bentley for his executive order signed last week and called on Conecuh Woods landfill developers to withdraw their application.

Conecuh County commissioners allowed the chairman of the Citizens for a Clean Southwest Alabama organization to speak during Monday’s meeting in Evergreen.

Johnny Andrews, chairman of CCA, addressed the commission with a plea to stop the landfill from coming to the area.

“This commission voted 5 to 0 against this four years ago,” Andrews said. “At that time you expressed the wishes of our citizens and we thank you.”

Commissioners will hold a public hearing March 10 at Reid State Technical College to allow concerned citizens an opportunity to express their opinions in the matter of the landfill application.

County Attorney Richard Nix said the executive order should not deter the commission from the path chosen in regard to the landfill application.

“In my legal opinion, after having read and studied Executive Order No. 8, the order has no effect on the process you’ve initiated,” he said.

Commissioners voted to seek the attorney general’s opinion in the case.

Andrews said commissioners are required to continue the process as previously begun to include a public hearing.

“Commissioners are require to hold a public hearing and to vote on the proposal,” Andrews said. “After the public hearing, we believe our commissioners will again vote on this landfill. But, there is a small chance they may not vote the same way they did four years ago.”

Andrews said the commission’s vote following the public hearing could create a long, expensive battle to continue the process that has already begun.

“This will likely be a slow and difficult path,” Andrews said. “Continuing this application process will be very expensive to the county. It would prolong a battle that has angered and hurt so many of our citizens. It has little or no chance of success and will be very expensive if Conecuh Woods forces our county to continue the application process.”

Commissioners did not respond to any of Andrews’ remarks Monday allowing him the floor to express opinions on behalf of CCA.

During his address to the commission, Andrews made a public plea to officials with Conecuh Woods regarding the proposed landfill application currently under consideration.

“On behalf of the people we all claim to love so dearly, we ask Mr. Stone to formally and quickly withdraw the Conecuh Woods application,” Andrews said. “When the new guidelines are finished please resubmit your application and our country and regional citizens can reconsider it in light of the new rules.”

Those new rules mentioned by Andrews will be put into place following Bentley’s order last week requiring members of the Alabama Department of Environmental Management to consider forming new regulation to govern landfills in Alabama.

“We strongly urge each commissioner to again vote against this proposal at the earliest possible date,” Andrews said. “The public opposition to this is overwhelming. And, the proposal would hurt, not help out county’s economy as illustrated by a new resolution opposing the landfill from the Coastal Gateway Economic Development Alliance. So, let’s put this issue to bed once and for all and preserve our homeland for the good of our children. Together we can build a healthy and prosperous Conecuh County.”

Following his address to commissioners, Andrews addressed an estimated 200 outside the courthouse in Evergreen who had arrived to voice their opposition over the proposed Conecuh Woods Landfill.

The public hearing set for March 10 at 9 a.m. will be held on the campus of Reid State Technical College located at the intersection of Alabama 83 and Interstate 65 in Evergreen.