One killed in fatal wreck 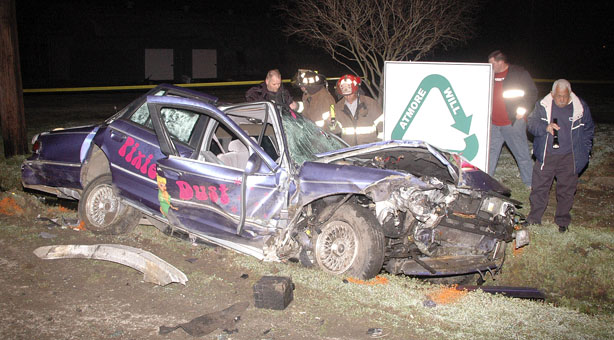 One person was killed and two others critically injured in a single vehicle accident on North Presley Street that occurred at approximately 9:37 p.m. Sunday.

According to Atmore Police Department officials at the scene, the driver of a purple, older model Ford Crown Victoria with the lettering “Pixie Dust” on the side lost control as he crossed the CSX railroad tracks near City Hall traveling north on North Presley Street and rolled over landing on the car’s wheels. It appears that the driver of the vehicle, which was carrying two passengers, traveled into a ditch when he lost control and struck a “No Passing Zone” sign causing the vehicle to flip.

One of the occupants of the vehicle, who was identified as 34-year-old Adam D. Patterson of Atmore, died at the scene of the crash. Two separate Lifeflight helicopters transported the other two occupants from the parking lot at Atmore City Hall. Willie Lee Patrick, 23, of Mobile was flown to USA Medical Center in Mobile for treatment of his injuries, while 49-year-old Carlton T. Hunt of New York was transported to Baptist Hospital in Pensacola, Fla.

Parts from the car and contents from inside the car were scattered along the roadway including numerous beer cans and an empty beer box, but it has not been determined if alcohol was a factor in the crash.

The investigation into the cause of the crash continued into early Monday morning, but no official cause has been released.

Personnel the Atmore Fire Department and Atmore Ambulance assisted at the scene as well as David’s Paint & Body.