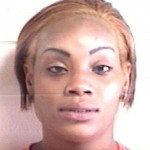 A Brewton woman was charged Monday with giving methamphetamine to a minor, Brewton police said.

Veronica Jean Knight, 23, of 1304 Sowell Road, Brewton, was arrested and charged with chemical endangerment of exposing a child to a controlled substance and distribution of a controlled substance to a minor, said Lt. Bryan Davis, who leads the Brewton Police Department’s narcotics division. The division worked with the district attorney’s office in the investigation, he said.

“Knight contributed a controlled substance, methamphetamine, to a minor under the age of 16,” Davis said.

Knight is currently being held in the Escambia County Detention Center.