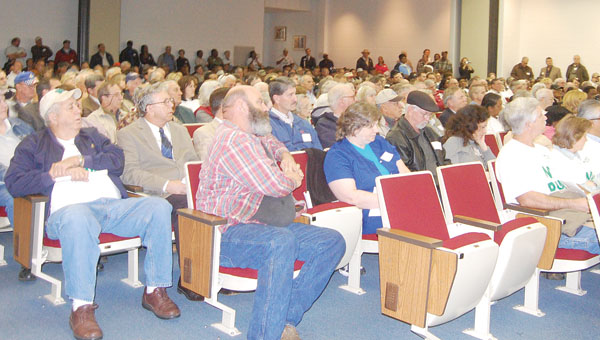 Hundreds of people crowded into the auditorium at Reid State Technical College in Evergreen for a public hearing held in reference to the application for a 5,100-acre landfill proposed by Conecuh Woods developers, with the vast majority speaking against the landfill.

Conecuh Woods Landfill developer Jimmy Stone addressed the Conecuh County Commission and those in attendance at the hearing about the project and also tried to dispel some of the rumors about the landfill. He noted that the landfill will not be the largest in the country — or even the largest in the state. Of the 5,100 acres on the property, 1,600 will be for the landfill and the rest will be designated as buffer zones or industrial property.

Because landfills have the potential for creating gas energy, Stone said, the landfill could be a draw for new or expanding industry in the area.

In response to concerns voiced prior to today’s hearing, Stone said the lining of the landfill would be sufficient to keep hazards at bay. He said a liner system planned for Conecuh Woods would be 9 feet thick when in place.

Public opinion was plentiful as area residents opposing the landfill were given an opportunity to speak.

Ruth Harrell, chairwoman of the Coalition for a Healthier Escambia County, spoke in response to Stone’s claim a liner for the landfill would not leak.

“There is no manmade liner that will not leak,” Harrell said.

Billy Smith, of the Poarch Band of Creek Indians, agreed.

“I don’t care how you wash it,” Smith said. “It is going to come downstream.”

Cathy Green of Flomaton asked commissioners not to “sell your soul to the devil.”

“You may make enough money to pave the streets with gold,” she said. “But what good will that do you if no one will live here?”

But some residents spoke in favor of the landfill.

“Turning trash to cash and energy sounds like the best idea to me,” said Mike McIntyre, who said he took photos of illegal dumps in Conecuh County for Conecuh Woods’ presentation.

Citizens for a Clean Southwest Alabama members said they hoped the opposition shown at the meeting would convince Conecuh County commissioners not to vote for the project.

“We are blessed to have this much of a turnout here today,” CCSA chairman Johnny Andrews said. “The Conecuh County Commission ought to see that the people they represent don’t want this landfill here and they won’t stand for it.”

But Conecuh Woods officials said the turnout at the public hearing was actually low.

“We were pleased to present our proposal today at the public hearing. While we know the opposition groups were disappointed in the low turnout, they were still able to raise all of the issues they wanted to discuss,” spokeswoman Rachel Dickinson said. “Despite the CCSA claiming more than 3,000 protestors would attend, there were less than 400 people, including supporters of the project, who signed up to speak.  These low numbers were despite two luxury buses being chartered to transport opposition speakers from outside Conecuh County. ”

The hearing, which began at 9 a.m., finally wound down by late afternoon.

For additional details concerning the public hearing in Evergreen, see the Saturday edition of The Brewton Standard or check our Website at www.brewtonstandard.com.