Pink Posse rocks for a cure 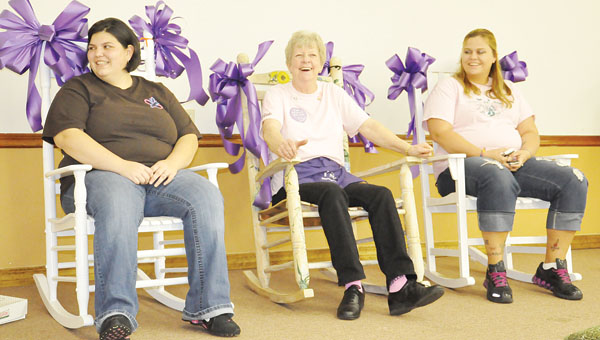 With team fundraisers heating up in advance of the annual Relay for Life event, members of the Pink Posse team were burning up the floor Tuesday at the East Brewton Civic Center.

Team members — made up of Mary Kay saleswomen in the area — held a “Rockin’ for a Cure” event to raise money for the American Cancer Society.

“We’ve had a really good turnout,” said Angela Greer, who with other team members took turns in rocking chairs on the stage at the civic center. “We’ve had a wonderful response from people. This is our first year to take part. We’re really excited.”

Team member Shirley Long is a 10-year cancer survivor; for her, the fight is personal — and the response is as well.

Long believes there is a reason she was still needed to rock along with her team.

“God had a reason for (my survival),” she said, pointing to her great-grandson Trey Lane on her lap. “Because of this right here.”

The Pink Posse team ended its day of rocking and selling donuts and pizza with a series of bingo games, with prizes provided by local businesses.

Relay for Life will be held April 2 at the Brewton Area YMCA.

DHR needs up even as budget cuts loom