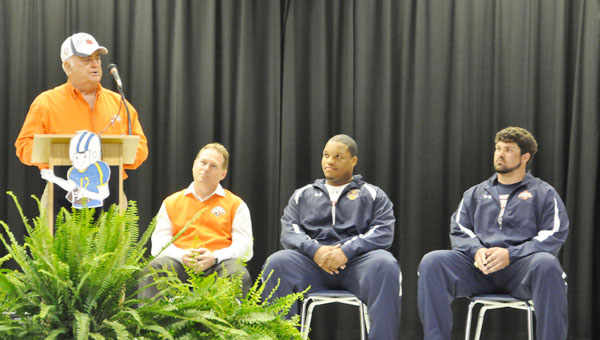 Three members of the 2010 National Championship Auburn Tiger football program were welcomed back to East Brewton Wednesday when W.S. Neal Middle School hosted an assembly and reception for the honorees.

Coach Scott Fountain and players Jamar Travis and Jared Cooper were honored as school officials welcomed them back to their hometown and to their alma mater.

“We are here to give recognition to three former students of this school,” WSNMS Principal Dennis Hadaway said. “They have moved on to bigger and better things and we are happy to have them here today.”

During a ceremony in the school’s gym, East Brewton Mayor Terry Clark presented each honoree with an official key to the city.

“On behalf of the City of East Brewton and our citizens we honor you today for what you have accomplished,” Clark said. “We recognized your work and what it means to this city, our people and to W.S. Neal schools.”

Comments from Escambia County School Superintendent Billy Hines emphasized the importance of dedication and showing respect for others.

“These men are dedicated and it shows in their work,” Hines said. “They probably have thought about quitting, but they didn’t quit. The difference between a winner and a loser is that winners don’t quit.”

“I remember the respect these young men showed to everyone while they were at W.S. Neal,” Frazier said. “These guys didn’t get where they are without it. Be careful how you act around those you come in contact with every day. You never know whose path your are going to cross in this life. Show respect to your fellow classmates, teachers and everyone around you and follow the example these men have set.”

For more on the visit of Fountain, Travis and Cooper, see Saturday’s edition of The Brewton Standard.