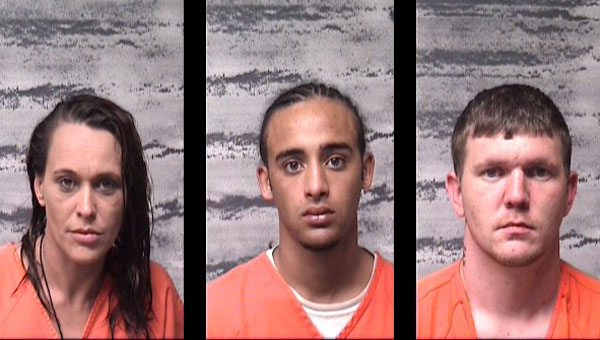 Daniel Collins Baker, 25, of Brewton was arrested along with Barbara Conway Huckabaa, 34, and Trenton Jeray Taylor, 18, both of East Brewton.

Lt. Bryan Davis with the BPD Narcotics Division said the arrests were made just after 7 p.m. in East Brewton.

“Agents with our division were conducting an investigation into the distribution of illegal narcotics which led them to Superfoods in East Brewton,” Davis said. “Our agents arrived on the scene at about 7:20 p.m. and witnessed an illegal drug transaction taking place in the parking lot.”

A search of the vehicle resulted in the discovery of crack cocaine and Xanax, both of which are controlled substances, Davis said.

Huckabaa is charged with criminal conspiracy to commit a controlled substance crime and possession of drug paraphernalia.

Taylor is charged with criminal conspiracy to commit a controlled substance crime.

Each of the suspects was transported to the Escambia County Detention Center to be booked on the charges against them.

Pink Posse rocks for a cure