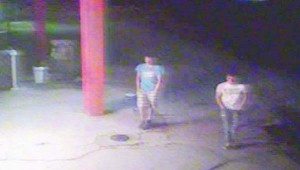 In what appears to be a series of related events, at least three businesses in the area were vandalized and burglarized over the weekend, according to law enforcement reports.
Brewton Police Department along with officers with the East Brewton Police Department and the Escambia County Sheriff’s Department are continuing an investigation — and one Brewton businessman is looking for answers as well.
John Cardwell, owner of Midtown Service Station, one of the businesses involved in a Saturday morning break in, said he is doing what he can to bring the suspects to justice.
“I have put pictures out for everyone to see,” Cardwell said. “I was able to get them on video with surveillance equipment at the station. I’m doing what I can to catch them.”
Cardwell said surveillance images revealed two male suspects broke into the business just after 2 a.m. Saturday morning.
“According to the time on our camera, they broke out the front door glass at 2:08 a.m.,” Cardwell said. “They weren’t able to get the door open because of a deadbolt. That’s when they started taking only the things they could reach through the broken door.”
Cardwell said the pair could have ended their raid on the store then, but chose to continue their activities later.
“They came back to the store at 2:35 a.m. and stayed until 2:49 a.m. going back and forth, in and out of the store,” Cardwell said. “I’m not sure what they were doing the whole time they were there. We found they had taken cigarettes, cigars and some snacks.”
Midtown’s events occurred early Saturday morning. S&J Quick Stop in East Brewton and Riverview Kwik Stop in Riverview were both hit by vandals and burglars sometime early Sunday morning, according to reports.
Escambia County Chief Deputy Mike Lambert said an investigation into the events is continuing.
“We believe all of these events are related,” Lambert said. “We have gotten some leads on some suspects in the case and expect to make arrests quickly.”
Brewton Police are investigating the events at Midtown Service Station. Escambia County Sheriff’s deputies are investigating the event in Riverview, while East Brewton Police are looking for answers in the incident at S&J Quick Mart.
East Brewton Police Chief Kenny Brazile said the S&J store on Shoffner Street suffered less damage than the two other businesses hit last weekend by vandals. “The store was not broken in to,” Brazile said. “There was some vandalism with the soft drink machine at the front of the store turned over into the parking lot. Also, a newspaper rack was stolen from the front of the store. There hasn’t been any other damage discovered at the store.”
Video surveillance cameras at Midtown Service Station and Riverview Kwik Stop captured images of suspects and vehicles at each location at the time of the break-ins.
Brewton Police have released images of a vehicle taken with surveillance equipment at Midtown. Sgt. Steve Ferguson said the department is continuing their investigation in the case.
“We are seeking help in identifying who owns the vehicle seen in the image,” Ferguson said. “The vehicle appears to be a 1998 to current, green Ford Ranger. The vehicle also appears to be a step-side and single cab. In one image, the vehicle appeared to be occupied by two white males.”
Ferguson said the vehicle was used in the burglary located at Mid-Town Service Station in the early morning hours of March 12.
“Anyone with information on this vehicle or the burglary needs to give us a call,” Ferguson said.
An image from surveillance equipment at Riverview Kwik Stop was made available by investigators with the Escambia County Sheriffs Department.
Anyone with information concerning the identity of the owner of the vehicle in question in the Riverview case is asked to contact the Escambia County Sheriff’s Department Investigations Division at 809-2152 or 867-0304.

Belleville work could be finished next month