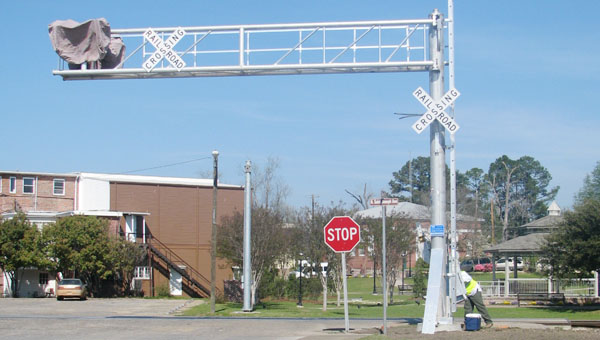 Nearly two years after a train crash at the Deer Street crossing in downtown Brewton, a new crossing signal and guard arm are being installed.

The Alabama Department of Transportation project saw work begin late last week with the warning signal already in place and a crossing guard arm is being installed this week.

Officials with ALDOT could not be reached today to determine when the signals and guard arm will be operational.

“This has been in the works since 2007,” City Clerk John Angel said.

An April 2009 crash involving a truck filled with logs and a CSX train caused damage to First Exchange Bank’s lobby and front service area when the truck failed to yield to the train at the crossing. Although no injuries were reported in the accident, the banking institution suffered severe damage. That accident prompted city officials to search for answers and step-up talks with ALDOT to have the signals put into place.

A similar crash also occurred at the crossing in September 2006. No injuries were reported in the incident when a log truck driver failed to stop at the intersection as a train approached.

For more details on the installation of the Deer Street railroad crossing signals, see the Wednesday edition of The Brewton Standard.