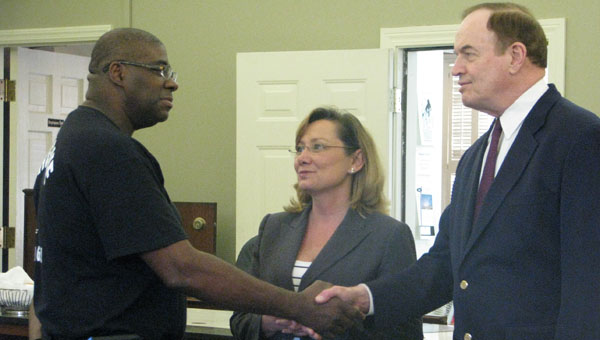 A capacity crowd sat patiently Monday in Repton’s Town Hall as Sen. Richard Shelby made a stop on his congressional tour of the state.
Repton Mayor Terri Carter greeted guests and expressed appreciation to Shelby for stopping in the town.
“I want to thank you for doing your parting in fighting this dump,” Carter told Shelby. “Thank you for having our back in this fight.”
Shelby said the possibility of having a landfill as planned by developers of the proposed Conecuh Woods Landfill would not be beneficial to the county.

Shelby encouraged those who oppose the landfill to keep working to stop the development near Repton in Conecuh County.

“Don’t give up the fight,” Shelby said. “We don’t need this and we don’t want this in Alabama. We want others to respect Alabama, don’t we? Image alone is not worth this.”

Shelby spoke to the audience members for nearly an hour speaking for a majority of the time on the currently proposed landfill situation in the county.

For additional comments from Shelby concerning the Conecuh Woods Landfill proposal and other topics discussed in Monday’s town meeting, see the Wednesday edition of The Brewton Standard.

Plan to vote absentee? Tomorrow is the deadline