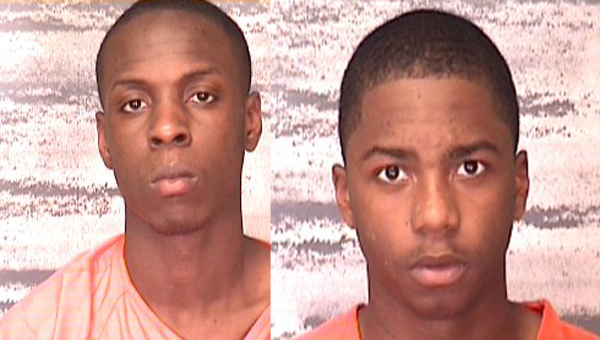 Three men from Montgomery threw some marijuana over the wall at Fountain Prison near Atmore Monday, then led police on a chase into Conecuh County, officers said.
Rico Gilmer, 18, of 462 Mulligan Drive, Montgomery, and George Ware, 20, of 5481 Oakleigh, Montgomery, were arrested along with a 17-year-old juvenile and charged with promoting prison contraband and felony attempting to elude officers.
At about noon Monday, guards in the tower at Fountain noticed a gold Honda Accord with three people on Highway 21 in front of the prison, Escambia County Chief Deputy Mike Lambert said.
“One of them ran and threw a package over the fence,” Lambert said.
The Honda then headed toward Interstate 65, and the dog team at Fountain tried to get the vehicle to stop.
“They ran at the correctional officers with their vehicle, and the dog team had to take evasive action to avoid being hit,” Lambert said.
Fountain officers notified Escambia deputies for backup and then initiated a “close follow” of the suspects as they fled toward the interstate and headed north, Lambert said.
“(The suspects) began running at speeds over 100 mph,” he said, “almost causing several traffic accidents.”
The Accord exited the Interstate at Barnett’s Crossroads, then headed north. When Barnett’s Highway turned into a dirt road, the suspect driving apparently lost control of the vehicle and hit an embankment, Lambert said.
“As officers came up, they got out and fled on foot,” he said.
Officers and dogs searched for the men, and an aircraft helped spot them along the creek and alerted the dog team. Officers took them into custody.
All three were held in the Escambia County jail on $10,000 bond, Lambert said.