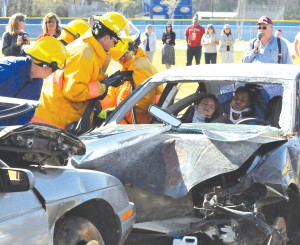 Sirens and the sounds of LifeFlight’s helicopter were loud Friday at W.S. Neal High School in East Brewton.
Students received a realistic example of how drinking and driving could play a big part of their prom this weekend as they witnessed a mock accident for Prom Promise.
W.S.  Neal’s annual Prom Promise event  involves a dramatic reenactment of a car crash involving prom students who are drinking and driving after the prom. The mock wreck results in the loss of life for one student, serious injury to the others, and the arrest of two young men.
Tammy Weeks, guidance counselor at W.S. Neal, said local police and rescue workers volunteer their time to create a scene as real as possible.
“A LifeFlight helicopter arrives on the scene as well to help portray the serious consequences of such an incident,” Weeks said. “Our hope is that Prom Promise will encourage young people to think before they act, to stand strong against the pressure to drink on prom night, and to drive responsibly. After the outside event, juniors and seniors and their prospective prom dates meet with the counselor and sign a Prom Promise contract stating they ‘refuse to be a statistic’ and that they promise to live responsibly and  ‘give up those selfish desires that can destroy humanity,’” Weeks said.
Eight senior students practiced and performed the real-life drama. W.S. Neal students particiapating in the event were: Quinton Burnett, Caleb Schaf, Monterius Culliver, Megan Andrews, Hillary Wiggins, Tyler Guest, Cody Laymon,  and Ashley Hillman. The coordinators of the event were Wayne Marvin and Chuck Wiggins. The narrator of this year’s Prom Promise was Bo Brantley of Flomaton.
Weeks said the staff and students of W.S. Neal High School would like to thank all those involved with this year’s Prom Promise: Frankie Lanier, Curtis’s East Brewton Salvage, William’s Memorial Funeral Home,  the ambulance service, the Sherriff’s Department, the East Brewton Police Depart-ment, Escambia Fire and Rescue, and Baptist LifeFlight.
“We cannot express our gratitude enough,” Weeks said. “Thank you for your commitment to the young people of this community.”
Brantley reminded the students of losing two classmates, Chason Godbolt and Reshena Young, in 2004.
Godbolt, 17, and Young, 17, were traveling south when they collided with a northbound vehicle at about 10 p.m. the night of W.S. Neal’s prom in 2004.
According to a story in The Brewton Standard, neither youth was wearing a seat belt, according to a report provided by the Florida Highway Patrol.
Godbolt and Young, both seniors at W.S. Neal High School, had attended the prom in 2004 and were attempting to pass a vehicle in a no-passing zone when the accident occurred, according to a report from the Florida Highway Patrol at the time of the incident.
Erica Jones, a senior at W.S. Neal, spoke to students at the event Friday.
“I would be absolutely devastated if I drove up on a scene like this,” Jones told students. “I know ya’ll are sitting here thinking this is just another day out of class, but this is real. I hope you all pay attention. I don’t want to get a call Saturday night saying one of ya’ll were in an accident. I don’t want to know Sunday or find out Monday. I want to come back to school and hear everyone talking about how great their prom was. I don’t want to be sad or cry or talk about it at another Prom Promise later. We don’t want anything to happen to any of us.”
Cory Chavers with the Escambia County Rescue Squad also stressed the seriousness of the situation being portrayed.
“It only takes two or three beers sometimes,” Chavers said. “We have seen wrecks where two or three beers were drank and they were just going out to have a good time. They come out and they could have just been changing the radio station or something and the next thing you know, you have drifted into oncoming traffic and nine out of 10 times, the drunk driver walks away from the wreck. The innocent person who was just out on their prom night or heading home from curfew, they are the people who die.”
Chavers said car accidents are the leading cause of death for high school aged people.
“Not any kind of disease or anything like that, car accidents, people not paying attention, drinking and driving are,” Chavers said. “We don’t mind coming out and showing this to the students. We really don’t want to have to get up at 2 or 3 a.m. in the morning and have to pull someone’s baby out of a car because they were drinking and driving.”
W.S. Neal High School’s prom 2011 is set for this evening in East Brewton.