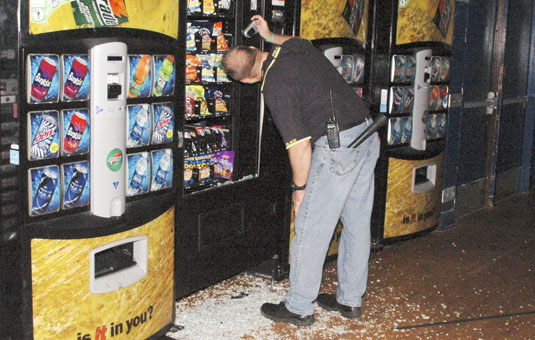 Investigators and officers with the Atmore Police Department were on the scene Sunday afternoon along with ECHS principal Zickeyous Byrd and ECHS liaison Jonathan Barnes.

Byrd said that the break-in ultimately hurts the school and the students themselves.

“We had a break-in overnight, which is very unfortunate,” he said. “Anytime that someone comes in and takes something that doesn’t belong to them or is something for the betterment of the school, it essentially hurts the school and the students. When someone takes things, it takes it way from the children.”

The incident occurred sometime after 8:30 p.m. on Saturday night, according to Byrd who left the building around that time.

The suspect who remains at large pried into several file cabinet, but did not take any files from them.

Byrd said the most the vandal got away with was some money from a vending machine in the school’s old gym.

“From what we noticed, they took the cash out of the vending machines, which is the school’s own source of revenue to purchase things,” he said. “They broke into the counselor’s office and went through a couple of files as well as the attendance office’s files. They also broke into a safe, but we don’t keep money in things such as that. It appears that someone was just being devious and trying to cause trouble for us.”

With the suspect on the loose, Byrd and the staff at Escambia County High School will be more alert of things that take place at the school after hours.

Byrd said he wants the culprit(s) to know that he and the police will do everything they can to catch them.

“Well, I would like them to know that we will be ready for them the next time they try to enter the school,” he said. “We are going to beef up our security and, of course, we do have cameras here that cover every aspect of the school. We are going to look at all of the footage and do our best to catch them.”

Anyone with information regarding the break-in at Escambia County High School is encourage to contact the Atmore Police Department at 368-9141.